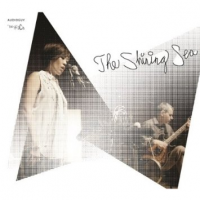 People who know me know that I am not particularly interested in jazz vocals or straight-up renditions of jazz standards. One of my hobbies is playing the drums, and I am also not really motivated to listen to music without drums or some sort of percussion. So, I put off reviewing The Shining Sea: Live at Olympus Hall a bit longer than usual, as it contains several jazz standards, a vocalist, and no rhythm section. Yet, I had really enjoyed Sunny Kim's work in drummer / composer Brian Adler's various projects, and I have long been enamored of Ben Monder's über-creative guitar work in a number of musical settings. So, I gave their duo album a chance. I was pleasantly surprised. The Shining Sea: Live at Olympus Hall is an engaging, even engrossing, listening experience from start to finish.

Kim and Monder don't just play jazz standards, they re-create them from the ground up, or from the insides out. Here, old chestnuts like "Willow Weep for Me" and "Let's Fall In Love" are recreated and recontextualized in a completely personal way, while preserving the sensibility of the "classic" versions (by Billie Holiday and Ella Fitzgerald, respectively). While the duo gives the latter a playful, boppish update—Monder's un-fussy guitar expertly frames Kim's extended scat improv—"Willow..." becomes a pensive, dark portrait of obsession, with minor key arpeggios flying everywhere underneath Kim's clear, unaffected alto; here looped and subtly processed. Peggy Lee's "The Shining Sea," a popular MOR hit from the 1960s, doesn't suffer from the jazz imprint of the other covers. Nevertheless, other potential issues abound. Fortunately, Kim and Monder give it an understated, yet emotionally-charged treatment that eschews torch song grandstanding.

There are also a couple of renditions of Korean songs. "Love, On Its Loneliness," a treacly pop lament, gets taken to some darker places. Singing in her native Korean, Kim's quavering, breathy vocal conveys pure desperation (here she seems to take a few cues from Björk) while Monder's fragile guitar hovers close by. "Wild Rose," ostensibly a traditional Korean lullaby, is conflated with Kim's original "Lullaby for Rose." Here, Monder and Kim are really dealing with traditional Korean popular music on its own terms, a refreshing departure though one that may jar those looking for a "pure jazz" experience.

Originals by Monder and Kim comprise the remainder of the album, and they're pretty adventurous. Kim's "Worm," an homage to Steve Lacy, invokes both traditional Korean folk music and "out" jazz in an tuneful, organic, and un-self-conscious way. Kim's "Everywhere" is a text by Rumi set to music. Interestingly, there's a bit of Pat Metheny lurking in its sunny melody and upward-climbing chord progression, and Kim's wordless vocal solo sounds a bit like Milton Nascimento. Monder's "Late Green," originally a vehicle for the guitarist's duo with Theo Bleckmann (No Boat, Songlines Recordings, 1997), is subtly reinvented as Kim lets Monder take the lead while she effortlessly rides wave after wave of spectral guitar mist and haze.

One final note on The Shining Sea: Live at Olympus Hall: mention must be made of its amazing recording quality. The audio literally sparkles with clarity, while preserving the intimacy of the performance. One would not even know that these were live recordings if not for the somewhat paltry smattering of applause after the last track. The audience may have been nonplussed, but this is an excellent and memorable performance by two musicians at the tops of their respective games.