By Dan McClenaghan
April 11, 2011
Sign in to view read count 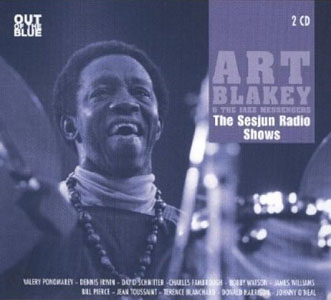 The old and irksome "but is it jazz" argument has probably never been brought into play when it comes to drummer/bandleader Art Blakey (1919-1990) and his ever-changing line-up of The Jazz Messengers. The music Blakey and his usually young players made was most certainly jazz, of the hard bop, hard-charging variety—brash and brightly hued, and joyously swinging.

The Sesjun Radio Shows captures later stage Blakey bands, recorded live for the Dutch radio show Tros Sesjun in 1978, 1980, and 1983. The star level of the personnel may not be as high as earlier Messenger configurations, but the music remains remarkably consistent under Blakey's taskmaster leadership.

The first set, broadcast in December, 1978, opens with alto saxophonist Bobby Watson's "Time Will Tell." Another Blakey trait was his ability to mine his band members' songwriting skills for his group. The tune is bright and up-tempo, rolling in on some unison trumpet/alto blowing, before Watson sears into a hot sax solo, demonstrating another Blakey band characteristic: these guys solo with supreme confidence. The three horn men in the front line each get their turns—Watson, trumpeter Valery Ponomarev and tenor saxophonist David Schnitter—while behind them, the rest of the Messengers maintain a steady, high-speed cruise control.

Some of the more familiar tunes offered up on the three sets include Benny Golson's "Along Came Betty," the classic "Stairway to the Stars," Shorter's "Free for All," the Great American Songbook jewel "Polka Dots and Moonbeams," and, of course, Blakey's signature song, "Moanin,'" from the pen of Bobby Timmons.

Of special note is the third set, four tunes that feature trumpeter Terence Blanchard, who doubled as musical director when Blakey's drinking began interfere with his ability in that area (though not in his playing). The band sounds a bit smoother and more together here, more refined, the "hard" in the hard bop polished down just a bit, with everybody—Blakey included—in the finest of form.