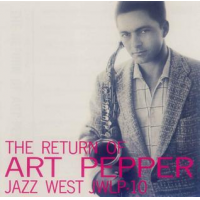 Alto saxophonist Art Pepper's first incarceration for drugs took place between August 1954 and July 1956, a period conspicuous for Pepper's absence from the recording studio. Pepper's first recording as a leader after his release was, aptly, The Return of Art Pepper. He had been busy as a sideman for trumpeters Shorty Rogers (Big Shorty Express (RCA, 1956)) and Chet Baker (The Route (Pacific Jazz, 1956)) before entering Capitol Studios on August 5, 1956 to record the ten pieces that would become the final recording. Blue Note Records later collected the sides Pepper recorded for Jazz West (a subsidiary of Aladdin Records), releasing The Return of Art Pepper—The Complete Art Pepper Aladdin Recordings, Volume 1 with additional masters from the sessions. Pepper sounds surprisingly good for having been away from recording nearly two years. At this point, he retained the cool and dry tone which would later give way to the torrential playing of his final comeback. The music is vintage West Coast cool, slickly arranged and performed.

West Coast cool is also the band Pepper plays with, all sidemen with whom he had previously worked. Jack Sheldon plays a tart, Dizzy Gillespie-influenced trumpet, while pianist Russ Freeman provides the support with which Pepper had become comfortable. The rhythm section of bassist Leroy Vinnegar and drummer Shelly Manne had few equals. Highlights of the recording include a brisk "Broadway," a chilly "You Go to My Head," and a Pepper Latin staple, "Mambo de la Pinta." This is not the best Pepper, but even less-than-optimal Pepper is still very good.