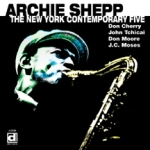 In 1963, cornetist Don Cherry , tenor saxophonist Archie Shepp , drummer J.C. Moses, alto saxophonist John Tchicai and bassist Don Moore performed at the Jazzhus Montmartre in Copenhagen . At the time, Cherry was just coming off from playing with Ornette Coleman, while Shepp was transitioning from Bill Dixon. Tchicai had met Cherry and Shepp in New York and become part of the collective.

Cherry was the most assured of the five, having developed and honed his skills—not only with Coleman, but through his interests in music from other genres. Perhaps it is the very raw and uncertain makeup of this talent that makes The New York Contemporary Five an historic document.

Cherry exhibits a raft of well-conceived ideas on his own "Cisum," finding his comfort zone as he casts the mold of composition aside and sets up sharp linearity, before acknowledging the catchy melody. Shepp and Tchicai go out in search of the lost chord before finding their common nesting ground and firing a salvo of phrases in conjunction. That sets the body in motion, and the in tandem brass interjections turn on a welcome heat. The way in which the front men revisit and dissect the melody with a greater sense of assurance makes the whole more satisfying than its parts.

Shepp gives "When Will the Blues Leave" a happy cast before Cherry takes it into blues terrain and swing. Moses and Moore are in their element, crisping the rhythm. Shepp shows a modulation of swing and honks, but does not always come up on top. Tchicai is a cascade of ideas that on occasion slip, but his character as an inventor comes to the fore soon enough to correct the imbalance and give the music definition.

Cherry injects poignancy into "The Funeral" but his opening statement is marred by a slight hesitancy as he formulates ideas. Once he settles into the grain, he lets the melody ooze in, before Shepp experiments with form and structure. It's a liquid manifestation that is never shallow.

Given that the players went on to marked careers in the fiefdom of free jazz, this is certainly an historic document that stands as a take-off point.

Cisum; Crepuscule With Nellie; O.C.; When Will the Blues Leave; The Funeral; Mik.