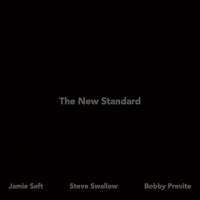 Inimitable bassist Steve Swallow has pretty much seen and done it all. His vast achievements, historic alliances, and easily recognizable sound are firmly ingrained into the jazz idiom. Yet drummer Bobby Previte and keyboardist Jamie Saft are among the more notable modern trendsetters. They've both played significant roles in New York City's nonconforming downtown scene amid respective discographies that boast sojourns into jazz rock, free-form improvisation and boundless experimental initiatives. Moreover, Saft's recent improvisational collaborations with avant-garde guitarist Joe Morris Slobberpup, 2013 and Plymouth, 2014 for Rare Noise Records signify a 360-degree contrast to the mainstream processes, evidenced here. Hence, the trio plants its seedlings in traditional jazz values, and it's a unit that transmits a back to basics, roots driven milieu.

Reviewed via the CD format, the label has also issued a 180-gram vinyl pressing sans any computer-based enhancements. I'm confident the LP version will heighten the trio's organic soundscapes, supplemented by the warmth and spaciousness of analog. Even though Saft and associates make every note count, framed on a tried and true process, the album is not formulaic by any means.

They gel to a medium-tempo waltz on "Minor Soul," where Saft's piano phrasings parallel the intricate harmonic fluidities of Bill Evans as Swallow takes a solo and dances around the central theme during the bridge. With the greatest of ease, the trio delves into spicy R&B flavored motifs and deep-rooted jazz blues grooves. And they add a Gospel tinge on "Clearing," enamored with a simple melancholic hook, emphasized by Saft's sweeping organ lines. Otherwise, you can easily imagine a choir singing spirituals in the background.

The musicians generate some high heat with slick, off-kilter patterns atop a brisk swing vamp, throughout "I See No Leader," as Previte punches out the rhythm with terse cymbals hits and snappy snare shots. But "All Things To All People" boasts an exotic Middle Eastern pulse with hints of the Latin vernacular and classic jazz combo leanings within a rather modest, resonating two-chord melodic hook. In sum, the trio projects a refreshing slant, partly due to the respective musicians' distinctive and stylistic musical personas, that seamlessly transforms into this memorable spin on the conventional piano trio format.