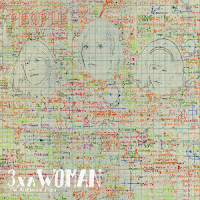 3xaWoman is the third genre-defying album from the avant-rock band People and the group's very first recording as a trio for the Telegraph Harp imprint. Originally founded by vanguard guitarist Mary Halvorson and irrepressible drummer Kevin Shea, the intrepid duo's prior efforts were issued by I And Ear Records. Joined by bassist Kyle Forester, this session finds the newly configured three-piece occasionally augmented by a stellar brass trio, consisting of trumpeter Peter Evans, trombonist Sam Kulik and tuba player Dan Peck.

Although the hardcore bluster of "What's So Woman About That Woman" comes across as a brash riff on Lionel Richie's "Three Times a Lady," "The Lyrics Are Simultaneously About How The Song Starts And What The Lyrics Are About" is exactly what it sounds like, a step by step explanation of the song as it progresses, rocking with abstract verve the entire time. Artfully deconstructed pop songs have never sounded so enjoyable.

Despite such irreverence, there are ample examples of urbane proficiency on display. The contrapuntal horn choral that opens the album, "Prolegomenon," far exceeds the compositional capabilities of the average indie-rocker—an aspect that is further examined on the following number, "These Words Make Up The Lyrics Of The Song," a combative encounter between the core trio and horn section. Adding gravitas to humorous subject matter, Halvorson's harmonious vocals are vaguely reminiscent of Mary Timony's work with Helium and Wild Flag, especially on the catchy "Piles For Miles," while "Supersensible Hydrofracked Dystopia!!!" tackles topical subject matter—in a mere 51 seconds.

Negotiating tricky time signatures, sudden tempo shifts, and dynamic modulations in tone, the trio rocks hard, but smart, delivering fourteen idiosyncratic tunes that range in duration from less than a minute to almost seven. Boldly exploring the fertile no man's land between jazz, rock and the avant-garde, People play fast and loose with conventional song forms and listener expectations, but 3xaWoman never fails to impress or entertain.

Prolegomenon; These Words Make Up The Lyrics Of The Song; What's So Woman About That Woman; A Song With Melody And Harmony And Words And Rhythm; Supersensible Hydrofracked Dystopia!!!; Zwischenspiel; Reinterpreting Confusing Lyrics To Popular Songs; Interoperable Intertrigo; Piles For Miles; Psychic Recapitulation; The Virtuous Relapse; The Caveman Connection; The Lyrics Are Simultaneously About How The Song Starts And What The Lyrics Are About; The Disambiguated Clone.