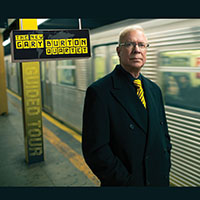 For some, retirement means winding down and enjoying what life has to offer, after a lifetime spent with the daily grind of making a living. With most musicians, however, while making a living has been a not insignificant challenge, making music can hardly be called a daily grind; it's work, to be sure, but it's also play. Still, for those who have— either by choice, necessity or both—engaged in a career that's a mix of education, recording and gigging, retirement can mean clearing the plate of at least one of those responsibilities.

Such is the case with vibraphonist Gary Burton who, after retiring as Executive Vice President of Boston's Berklee College of Music, has done something he's not done for over three decades: put together a group that's released two consecutive recordings without a change in personnel. The last time he did that, with 1980's Easy as Pie and 1982's Picture This—two ECM recordings that remain on the list of recordings from the German label still awaiting release on CD—he had a sax-led quartet that, in addition to longtime musical partner Steve Swallow, included two young players he'd met through his association with Berklee.

Based on the captivating, bursting-out-of-the-speakers Guided Tour, which follows 2011's similarly impressive Common Ground—Burton's Mack Avenue debut and first recording with the New Gary Burton Quartet—the vibraphonist has brought these three musicians back because, as terrific an opportunity as it undoubtedly is for all of them to work with one of the living legends of the instrument, it's equally clear that they're giving something back, lighting a serious fire underneath Burton that he's not had in a steady band for a long, long time.

It's time to stop referring to Julian Lage as a wünderkind because— despite an impressive start as the subject of the 1997 Academy Award- nominated documentary, Jules at Eight, live performance at age nine with Carlos Santana and, just a year after playing on mandolinist David Grisman's Dawg Duos (Acoustic Disc, 1999), establishing his first connection with Burton—the 25 year-old guitarist has already amassed a rich résumé that, in addition to two recordings under his own name (including his eclectic 2009 EmArcy debut, Sounding Point), is full evidence of a guitarist who has well and fully arrived. If recording and gigging with everyone from relative contemporaries like Taylor Eigsti and Eric Harland to more seasoned veterans like Nnenna Freelon and Terri Lyne Carrington isn't enough, then recent collaborations with fellow six-stringers Nels Cline and Jim Hall—a particularly significant touchstone and mentor for the young guitarist—should be.

Burton first encountered drummer Antonio Sanchez on the reunion tour with Swallow and Pat Metheny that resulted in Quartet Live (Concord, 2009), and it's no surprise that he's recruited the Mexican expat for this new group as well; Sanchez has been Metheny's drummer of choice for over a decade, and for good reason: there's truly little (if anything) that this firebrand forty-something drummer can't do. Ditto the ubiquitous Scott Colley, a bassist whose own resume—in addition to infrequent but superb recordings under his own name, like 2007's Architect of the Silent Moment (Cam Jazz, 2007)—has included everyone from John Scofield andKenny Werner to Jim Hall and, not coincidentally, Sanchez, whose own New Life (Cam Jazz, 2013), is a major compositional leap forward for the drummer.

Like Common Ground, Burton's new quartet also draws mostly on its own compositional acumen, with only two of its ten tracks culled from external sources. One, an old chestnut, Michel Legrand's collaboration with Johnny Mercer, "Once Upon a Summertime," opens as a dark, rubato tone poem brimming with implication that is ultimately (and briefly) delivered upon when the quartet moves into straight time for brief but beautifully constructed solos from both Lage and Burton, before returning to the out-of-time intro where, once again, Lage layers the familiar melody over an ethereal bed of vibes, Colley's soft arco, Sanchez's swelling cymbal work and the guitarist's own overdubbed, finger-picked voicings. The other, Fred Hersch's "Jackalope," first heard on the pianist's Alive at the Vanguard (Palmetto, 2012), is so radically reinvented—rhythmically, alternating between 7/4 and 3/4 passages, and extraordinarily reharmonized—as to make it almost completely unrecognizable from the original, but in the best way possible. It's one of the album's most incendiary tracks, as Sanchez delivers an almost nuclear punch over the song's changes (rather than the more typical and anticipated) ostinato, giving the drummer an opportunity to further flex his compositional muscles, but this time in the context of soloing.

The original music is nicely divided amongst the group, with Lage contributing three tracks to Sanchez and Burton's two apiece. Colley contributes just one, but makes it really count. Opening with a lyrical a cappella bass solo, Colley's balladic "Legacy" patiently unfolds, slowly leading to solos from Burton, Colley and, finally, Lage, who is so completely atypical for a guitarist his age in that he's already reached the point where he's got nothing left to prove, leaving him free to surrender to the demands of the music, rather than the other way around.

Sanchez's opening "Caminos" is a propulsive, modal, 6/8 burner; after a series of knotty lines and unexpected starts and stops, it ultimately reveals itself to be a minor-keyed blues that gives both Burton and Sanchez—this time, indeed, over an ostinato—a chance to cut loose. The drummer's swinging "Monk Fish," on the other hand, closes out the set with a discordant theme that pays homage to its source, pianist Thelonious Monk, while at the same time playing with tempo in ways the jazz icon would never have imagined.

Two of Lage's three compositions—"The Lookout" (another altered blues) and, especially, "Sunday's Uncle"—are amongst the album's fieriest, but what gives them a certain levity of sound, beyond the delicacy of Burton's vibes, is Lage's tone throughout the set. Avoiding the rock-edged overdrive, heavy reverb, looping and other effects processing employed by so many guitarists, Lage's tone, instead, rests somewhere between acoustic and electric—not unlike Jim Hall but, with greater attention to attack, leaning harder on the acoustic side of the equation. Lage occasionally uses a harmonizer to double his lines an octave above or below, but even that is used so sparingly and mixed so low as to be felt more than heard. "Helena," Lage's third contribution to Guided Tour, is another up-tempo tune with Lage's most impressive solo of the set—a combination of angular phrasing and lithe linearity, as he builds towards a climax of chordal sophistication that speaks more than outright virtuosity ever could.

The entire quartet is, of course, predicated on a collective technical mastery that nevertheless avoids any kind of excess on display. Instead, the music comes first, as on Burton's "Jane Fonda Called Home," an ambling 6/8 piece that challenges both the vibraphonist and Lage to find new ways to weave melodies through an endless series of changes. And find they do; Burton has always held a reputation as a player rarely less than perfect, even as he takes risks at every turn, but with this group, he's surrounded himself with three players capable of the same degrees of predictable unpredictability, precision in execution, and intense interpretive and interactive skills.

With everyone so busy (except, perhaps, the retired Burton), it's a task in itself to keep a group like this together, but with the one-two punch of Common Ground and, now, the even stronger Guided Tour, the hope is that Burton can now do something he's not done before: keep a lineup stable for a third round. With the most impressive group he's had since the '70s, when his two-guitar quintet with Mick Goodrick and a very young Pat Metheny tread new territory with records like Ring (ECM, 1974), the only thing to ask of Burton at this point in his career is: more, please.