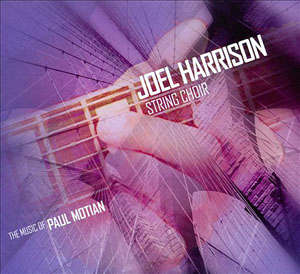 Joel Harrison has stretched the boundaries of form and freedom for over fifteen years, but Urban Myths (HighNote, 2009) and, in particular, the ambitious The Wheel (Innova, 2008), have represented significant evolutionary leaps. The Wheel married a conventional horn-led jazz quintet with a classical string quartet, its collection of Harrison originals pushing the limits of cross-pollination by eliminating all preconceived stylistic delineators. The Music of Paul Motian takes The Wheel's advancements a step further, focusing on Motian's writing, rather than the textural and temporally implicit playing approach that has made him such an ongoing role model for generations of drummers.

With over forty albums as a leader, Motian's music aligns his belief in freedom, as a prerequisite, with a uniquely developed jazz vernacular and the American-born drummer's Armenian roots. Harrison gets right to the nub of the writing, focusing on the drummer's longstanding collaboration with guitarist Bill Frisell and saxophonist Joe Lovano as the primary reference point for interpretations of ten Motian compositions, and two tunes associated with the drummer, for the guitarist's String Choir—an often ethereal, but equally grounded group that conjoins two guitarists—Harrison, and the equally overlooked Liberty Ellman—and a string quartet with no shortage of collective improvising cred.

The underlying beauty and open-ended economy of Motian's writing is the current that runs beneath the entire program. On the title track to It Should Have Happened a Long Time Ago (ECM, 1985), Harrison and Ellman join at the hip for an arrangement that passes Motian's melancholy melody, tag team-like, amongst the group—held by the guitarists, at times, but elsewhere by violinists Christian Howes (Harrison's first-call since The Wheel and another criminally undervalued talent) and Sam Bardfeld, violist Mat Maneri and cellist Dana Leong. The beauty of this album opener is the String Choir's avoidance of delineation, seamlessly integrating with persistent, egalitarian interaction. Elsewhere, Harrison takes the more jagged "Drum Music," first heard on Le Voyage (ECM, 1979), but more rooted in the quintet version on Jack of Clubs (Soul Note, 1984), with a central free-for-all that spotlights the sextet's six-way telepathy, as first one idea from Leon acts as a rallying point, only to gradually evolve to the next..and the next, before everyone cues back to the angular theme.

Combining abstract Americana interests brought to Motian's trio by Frisell on Harrison's arrangement of Thelonious Monk's "Misterioso," and turning Scott LaFaro's "Jade Visions"—the only piece not appearing on a Motian record, but a tune he played often with pianist Bill Evans—into a haunting tone poem, the conversational approach to its blending of structure and spontaneity is all-Motian—and, of course, all-Harrison.

The Music of Paul Motian suggests that Motian's music deserves to be reexamined for its repertoire potential. With Harrison's sometimes expansive, elsewhere intimate arrangements for his unorthodox String Choir, the guitarist has created a lasting tribute to a drummer who, as he approaches octogenarian status in 2011, clearly has plenty left to say. It's also a compelling endorsement of Harrison, an artist who reveals new twists and turns with each successive release.