By Lawrence Peryer
October 14, 2011
Sign in to view read count 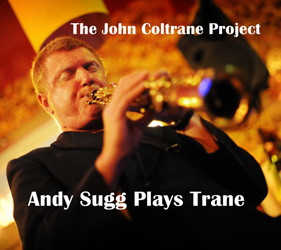 Recorded live in Melbourne, Australia, on July 17, 2010, saxophonist Andy Sugg and his group bring tasteful and modern sensibilities to the performances on this set. Sugg and his compatriots canvass the all-too-brief ten-year period spanning saxophonist John Coltrane's emergence from the shadow of trumpeter Miles Davis to that of a leader of the jazz avant-garde.

The occasion for the performances captured here was the 43rd anniversary of Coltrane's passing. While it may be cliché to say that the sax great's spirit is present throughout these pieces, such a fact does not make the statement any less true. Sugg assembled an intriguing repertoire, very representative of Coltrane's life of musical and spiritual exploration, and did justice by it.

"Welcome" kicks off the program. The graceful ballad, which on Coltrane's Transition (Impulse!, 1965), featured pianist McCoy Tyner at what had become the bleeding edge of his ability to support his bandleader, is interpreted beautifully. The arrangement is faithful but the instrumentation captures the fragility of the piece in an entirely fresh way. At about the half-way mark of the nearly twelve minute track, the horns lay back, making way for an astral quartet of drums, bass, harp and guitar that reveal an interplay only achieved through a deep openness to, and understanding of, a work.

"Greensleeves" opens with a guitar and harp prologue before making its way to the main theme. Trumpet, sax and guitar combine in various pairings to carry the melody line while keyboardist Daniel Gassin lays down a funky electric piano vamp. The solo here is where Sugg most bald-facedly conjures Coltrane's style and tone, hitting both ends of the horn's register in a single phrase. Gassin's comping goes modal behind guitarist Stephen Magnusson's exploratory solo. Magnusson deftly avoids repeating licks and phrases or falling into any other stylistic traps. His solo is singular and a revelation. Bassist Ben Robertson plays the most minimal of figures behind Nadje Noorduis's trumpet solo before Sugg begins responding to the trumpet lines on his horn and the entire band kicks back in. A powerful version that breathes new life into this Elizabethan melody, which Coltrane recorded for his Impulse! debut, Africa/Brass (Impulse!, 1961).

Interestingly, neither of the horn players takes a solo on the next piece, an incredibly funky take of "Moment's Notice." On Blue Train (Blue Note, 1956), the song was a rave up for not only Coltrane but also trombonist Curtis Fuller and trumpeter Lee Morgan. Here, Gassin and Magnusson air it out while propelled by some nimble drumming by James McLean.

"Peace On Earth" is one of the least tempestuous of Coltrane's later compositions, though introduced into his sets at the most free and out period of his career. The version here features solo vocalizations by Tom Barton before seguing into a Sugg saxophone interlude featuring strong support from Natalia Mann's harp and Robertson`s bass. The instrumentation alone suggests late period Coltrane though the music here is never that dense or frenetic. Mann's harp work is delightful, however, and accompanied delicately by some atmospheric trap work by McLean.

Sugg closes the set with a composition of his own, "Ups and Downs"; a bold choice, to be sure, given the iconic nature of the preceding material. By and large, his song holds up. Once again the instrumentation of Sugg`s ensemble adds a modern flair. Firmly in a post-bop vein, the track would not be out of place on one of Coltrane`s Atlantic recordings or a mid-1960s Blue Note release. Sugg seems particularly inspired to be playing one of his own songs and gives what may be his lengthiest workout of the set before making way for Noordhuis's most interesting contribution. The trumpeter's sympatico with drummer McLean is particularly intriguing.

The production work on this record is noteworthy. Recording and mixing is credited to James Clark, a prominent Australian musician and engineer. Clark made a laudably clean and dry recording, and each instrument was mixed with a distinct tone and timbre. There is plenty of space in the mix to capture, for example, the interplay between bassist Robertson and drummer McLean on the funkiest breaks during "Moment's Notice," or the razor-like, Marc Ribot-inspired runs of guitarist Magnusson.

The John Coltrane Project: Andy Sugg Plays Trane, is a jazz record in the most ideal sense, relying on and building upon classic repertoire while never being afraid to push boundaries and challenge conventional wisdom.