BY KARL ACKERMANN
November 13, 2014
Sign in to view read count 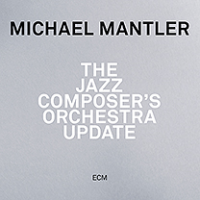 Trumpeter Michael Mantler has been a fixture on the US music scene for so long that it's easy to forget the global nature of his career. Born in Vienna, Austria, he came to the US in the early 1960s working with Cecil Taylor and co-founding the Jazz Composers' Orchestra Association (JCOA). The resulting JCOA self-titled album (JCOA/ECM, 1968) is historic in its scope of content and musicianship including Mantler's then-wife, pianist Carla Bley, and some of the finest work in the careers of trumpeter Don Cherry and pianist Cecil Taylor. More than forty-five years later The Jazz Composer's Orchestra Update brings together some of Mantler's more recent colleagues—as well as new faces—in a collection that rivals the original in terms of freshness and enthusiasm.

Mantler has consistently worked with variations of his signature style, so not surprisingly there is an element of familiarity in The Jazz Composer's Orchestra Update. That's not to say that the new collection sounds at all dated or that the original doesn't hold up remarkably well after all these years. Mantler took a very open ended approach in reimagining the original JCOA scores, maintaining the original instrumentation but eliminating the pervasive duplication of instruments. The downsizing doesn't diminish the fullness of sound as evident from "Update One." Opening like a large ensemble overture, the piece gives way to Harry Sokal's tenor saxophone improvisation and a gradual build up to more open spaces.

Mantler is a tactician in his approach to balancing structure and improvisation. Not a fan of the excesses of free playing, he limits such solos while carefully avoiding constraining the flow of creative juices. He has retooled many of the original solos giving some of the previous roles to different instruments. In the course of reimagining these pieces Mantler incorporates a wide variety of styles from the abstract swing of "Update Eight," where rhythms are disjointed and edgy, to the soulful "Update Nine" that by turns includes elements of classical, free jazz and blues. "Update Five" is strangely reminiscent of Deep Purple's Concerto for Group and Orchestra (Tetragrammaton, 1969) with the cinematic drama of Gil Evans's thrown in for good measure. The crossover of orchestration and progressive rock guitar shouldn't be a surprise to those familiar with Mantler's eclectic tastes.

Despite JCOA being an important part of jazz history, Mantler has never achieved the recognition of many of the association's members such as trumpeter Ed Blackwell, bassists Ron Carter and Charlie Haden, guitarist Larry Coryell, drummer Andrew Cyrille and fellow trumpeter Randy Brecker. He maintains a low visibility—as a performer—on The Jazz Composer's Orchestra Update with only one notable (but scorching) solo on "Update Twelve Pt. 2."

Mantler had served a producer and guest artist on the historic Escalator Over the Hill (JCOA, 1971), creating a work whose scope has never been equaled. He has composed around the written words of Samuel Beckett and Harold Pinter and recorded in the diverse company of the London Symphony Orchestra and Pink Floyd's Nick Mason. Still, it may be that Mantler's reluctance to perform live that has kept him from wider recognition. The Jazz Composer's Orchestra Update is sufficient reason to revisit this remarkably talented musician/composer or seek him out for the first time.