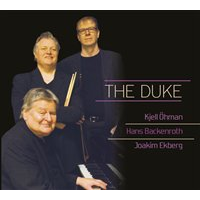 In the somewhat circumscribed world of Swedish popular music, Kjell Öhman has been there, done that and bought the T-shirt. The keyboard wizard, born in 1943, has worked as a studio musician on more than three thousand recordings, with stars ranging from keyboardist/singer Georgie Fame to harmonicist Toots Thielemans, produced music for some of the country's top TV shows and, for 17 years, was musical director of a national institution, the televised summer sing-alongs at Skansen, Stockholm's outdoor museum.

Of late, he has become increasingly involved in jazz, notably playing Hammond organ with guitarist Erik Söderlind (born 1981), to recreate the sound of B3 hard bopper Jimmy Smith. Now he's doing his own thing on an album of jazz standards, playing piano with Hans Backenroth, one of the best bassists on the Scandinavian scene, and drummer Joakim "Jocke" Ekberg—who, like Öhman, has hitherto worked primarily as a studio and TV musician.

They are extremely competent and the resulting music very listenable, but lacking what Whitney Balliett famously called "the sound of Surprise." In other words, it's all a trifle predictable.

Of the jazz standards, Öhman includes two by his idol, Oscar Peterson—the up-tempo opener, "Kelly's Blues" and the ballad "When Summer Comes." Both allow Backenroth solo space in which to salute one of his own mentors, the late, great bassist Ray Brown, who played extensively with Peterson.

But the standout is the title track, Dave Brubeck's tribute to Duke Ellington. Melodic, verging on catchy, but by no means easy to play (Brubeck originally planned to call it "The Duke Meets Darius Milhaud"). Öhman & Co, undaunted by a welter of covers from some of the greatest names in jazz, makes a really good fist of this one.

Kelly's Blues; One For The Woofer; Stairway To The Stars; The Duke; Squatty Roo; Do You Know What It Means To Miss New Orleans?; When Summer Comes; The Best Things In Life Are Free; My Foolish Heart; Afternoon In Paris; Shanna.