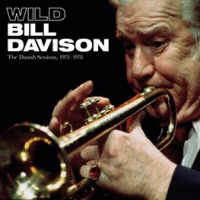 Wild Bill Davison was aptly described by Humphrey Lyttelton as the kind of drunken reveller who throws his arms around your neck one moment and tries to knock you down the next. Aside from his drinking, Wild Bill was, more importantly, a white Dixieland cornet player of considerable ability, with a fierce, uninhibited attack, whose heroes were Louis Armstrong and Bobby Hackett.

Author and jazz trumpeter Richard M. Sudhalter saw Davison for the first time at Eddie Condon's New York club in the 1950s. He said he looked "like anything but the standard image of the cornet or trumpet player. Not like Louis Armstrong, horn tilted up and eyes rolled back as the tone takes flight; not like Maxie Kaminsky, so tiny that his instrument seems gigantic in his hands. Not like Bix Beiderbecke, in some old photo or other, dented cornet pointed resolutely to the floor. Nope. This guy is seated, one leg crossed casually over the other, drink on an upended barrel in front of him. He sweeps the cornet into the side of his mouth to expel some supercharged phrase, then jerks it away as if it's too hot to keep there. And I realize, awe-struck, he's chewing gum! Where in the world does he keep that stuff when he's blowing?"

The mystery was never solved. Not in the US, nor in Denmark, where, towards the end of a tumultuous life, Wild Bill lived and worked from 1973-1978.

Why Denmark? Henrik Wolsgaard-Iversen, chairman of that country's Ben Webster Foundation, in the booklet accompanying this four-CD, one-DVD box set, traces Wild Bill's move to Scandinavia to the 1972 Newport Jazz Festival. Papa Bue's Viking Jazz Band from Copenhagen was featured, along with a reunion of the Eddie Condon band that included Davison. A backstage meeting between the two clans was inevitable. At it, Arnvid Meyer, leader of the Danish Jazz Centre and a devoted Wild Bill fan, cornered Davison and suggested a prolonged stay in Denmark.

Contacts continued, with speculation that Davison might take over from Keith Smith, the Viking Jazz Band's regular cornet player. No one thought anything much of it until one day Davison turned up at a gig by the Vikings in Denmark. He greeted everyone else in the band, then said to Smith, "It's not because I didn't see you that I didn't say hello." This was Wild Bill's way of saying he was after Smith's job. It says a lot about the sort of edgy, often downright nasty character he was. When he did become a member of the band, he had to be reprimanded for his use of racial insults. The Danes told him, "We don't do that here."

Wolsgaard-Iversen recalls Davison joining—uninvited—a table at a Danish jazz club, bumming drinks, then standing up and flinging the tablecloth, with all the bottles, unto the floor. He then went to the next table and did the same thing. Another ploy was to greet perfect strangers with "How are you, my friend?" then order drinks on their tab.

Wild Bill, the dedicated jazzman, is sometimes overshadowed by such exploits. Louis Armstrong is said to have told him, "I'm so glad you continue to pursue this music, and you've never taken anything from me." Mind you, Wild Bill himself was the source of that quote.

This release is a chance not just to re-evaluate Davison's playing but to take a sentimental journey back in time to the heyday of the US revivalist movement in general. A live broadcast from the Eddie Condon club, opens with these immortal words: "Hello, this is Doctor Jazz with a prescription for what ails you." Better still, the DVD features a film of the Eddie Condon band, including Wild Bill, playing a pretty typical blues-based program, with strangely formal introductions by Condon. This is jazz history —the real deal.

CD No. 4 features Wild Bill with strings, one of his stranger Danish gigs. He did it sitting down, a bottle of the hard stuff to hand, with the Danish string section hovering all around him. Davison said of the session: "The conductor, Ole Kurt Jensen, is an extremely conscientious young musician himself and we had the best scores, with players who work with the Danish Radio Symphony or from the pit of the Royal Theatre. It became a one-big-happy-family style of things. We all played music." Well yes, until he flubbed the ending to a number and wanted the orchestra to perform it again immediately. The classical musicians refused, telling him it was time for a break. Davison yelled: "F---all strings!"

CD 1 is a pretty typical Papa Bue session featuring Davison on such numbers as "Way Down Yonder In New Orleans," "Christopher Columbus" and "Blues My Naughty Sweetie Gave To Me." Though, in general, Wild Bill was seen as a progressive influence on the band, responsible for phasing out many of the old trad warhorses in the Vikings' repertoire. He would also call young musicians such as Jesper Thilo to the stage, a throwback to his days with Eddie Condon when "modernists" like Lester Young would sit in on sessions.

Davison's wife Ann kept a firm grip on the pursestrings during Wild Bill's Danish sojourn, so that when it came to an end, the couple were able to retire to a mobile home in sunny Santa Barbara in California. Here Wild Bill would spend his twilight years, staring out to sea, thinking of a far-off land where he was a legend in his own lunchtime.

CD1: Driftin’ Down The River; Christopher Columbus; Baby Won’t You Please Come Home; Runnin’ Wild; Save It, Pretty Mama; A Cottage For Sale; China Boy; When It’s Sleepy Time Down South; Old Fashioned Love; Blues For Ann; Way Down Yonder In New Orleans; Farfar’s Blues; I’m Confessin’; Blues My Naughty Sweetie Gives To Me; I Can’t Get Started; Lady Be Good; All That Meat And No Potatoes; I’m Gonna Sit Right Down And Write Myself A Letter; I Wonder Who’s Kissin’ Her Now. CD2: Sweet Georgia Brown; I Can’t Believe That You’re In Love With Me; Just A Closer Walk With Thee; Sweet Lorraine; Georgia; But Beautiful; Someday You’ll Be Sorry; Everything Happens To Me; Memories Of You; Blue Turning Grey Over You; Exactly Like You. CD3: Improvisation For The March Of Time; If I Had You; The Sheik of Araby; When My Sugar Walks Down The Street; Avalon; Squeeze Me; Dippermouth Blues; Keeping Out Of Mischief Now; Black And Blue; Do You Know What It Means To Miss New Orleans; I Want To Be Happy; Memphis Blues; Ole Miss. CD4: Sugar; Sweet And Lovely; Serenade In Blue; A Ghost Of A Chance; Our Love Is Here To Stay; Prelude To A Kiss; She’s Funny That Way; Black Butterfly; If I Had You; Rockin’ Chair; Mandy Make Up Your Mind; When Your Lover Has Gone; Sentimental Journey. DVD: Royal Garden Blues; Blue And Brokenhearted; Big Ben Blues; Stealin’ Apples; Little Ben Blues; Muskrat Ramble.