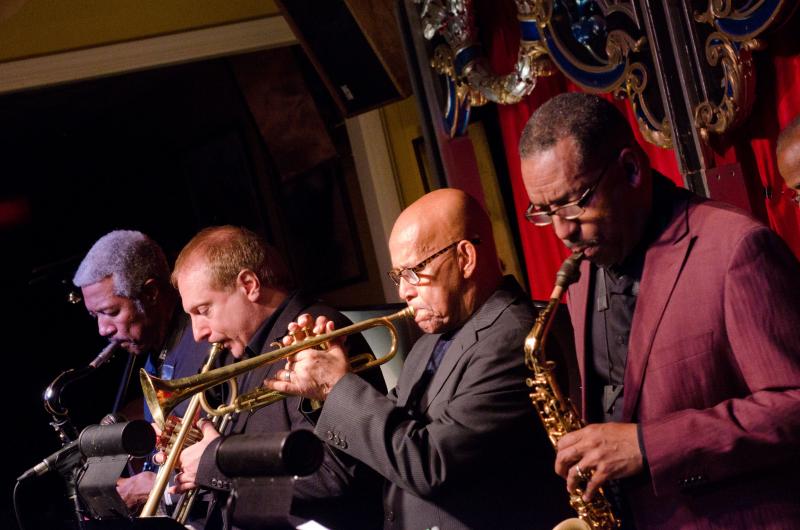 The jazz business is a fickle mistress. Few things stay the same and what's here today isn't always there tomorrow. As such, the norm for many decades has been for leaders to assemble groups of different sizes and varieties for recordings purposes and then look for pickup bands while touring the country. Although there are always exceptions, seldom do you see ensembles filled with first-call musicians lasting for extended stretches of time. In recent years however, the hard bop collectives One For All and The Cookers have been successful in breaking this mold and the communal experiences these musicians have shared have delivered products that are greater than the sum of their parts.

Founded in 2007, The Cookers have steadily build a following while documenting their work over the course of five acclaimed albums, their most recent effort being The Call of the Wild and Peaceful Heart on Smoke Sessions. Lucky to be one of the stops on a recent set of dates in support of the album, Cleveland's Nighttown presented this true super group on a recent cold and snowy Wednesday evening. At forty bucks a seat, the club took somewhat of a risk in presenting the show, but a considerably packed house confirmed that if you offer quality music, they will come. With every available space filled with tables and chairs, a close connection between artists and audience was fostered. The results were nothing less than stimulating, to say the least.

Kicking off with Billy Harper's title track from the new release, this seven-piece unit filled the room with a lively sound that almost suggested a big band. Drummer Billy Hart nearly overwhelmed the unit with his slamming snare accents and cymbals crashes. Then when the middle section of the tune kicked in, Harper soared and Hart let forth with a fervor that threatened to end in derailment at any point, only to then be locked back in with the precision of a fine timepiece.

From their first album, "Peacemaker" served up a fine mid-tempo platform for the talents of trumpeter Eddie Henderson and alto saxophonist Donald Harrison. A classic dating back to Lee Morgan's final album, Harper's iconic "Croquet Ballet" functioned as one of the highlights of the evening, its waltz tempo and unique form allowing for many fine solo moments. Eighty-one-year-old bassist Cecil McBee delivered a melodic gem during his time in the spotlight. Elsewhere, he was a regular rock of Gibraltar in his overall support. For health reasons, regular George Cables was spelled by Xavier Davis, but his enthusiasm for the music and obvious talents left nothing lacking in the piano department.

From Harper's pen again, the placid "If One Could Only See" left plenty of room for Henderson's voice to be heard. Ushering in his statement with bursts of notes, followed by the alternating use of time and space, the trumpeter demonstrated his knack for storytelling. By contrast, fellow trumpeter David Weiss's style proved all the more sleek and streamlined and attuned to less of a dynamic range, while still having its own beguiling merits.

A perfect foil for this bristling band, Freddie Hubbard's "The Core" served largely as a vehicle for an extended drum solo from Hart. In a melodic display of genius, you could hear the drummer clearly following the form of the tune, yet there was a loose sense of abandon that brought forth exclamatory cymbal crashes and bursts of fills across the tom-toms. As incendiary as it gets, the audience would not allow this number to serve as the night's conclusion. Already into the two-hour mark, they demanded an encore, and the Cookers eagerly obliged.