By EYAL HAREUVENI
December 26, 2012
Sign in to view read count 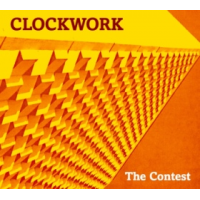 Trondheim, Norway's jazz conservatory has an excellent reputation for nurturing countless original musicians and outfits. Clockwork, a Norway/Sweden quartet, was formed in that conservatory in 2009 and, after numerous tours, now has The Contest, a debut co-produced, mixed and mastered by Swedish saxophonist Jonas Kullhammar.

The compositions were written by three quartet members: pianist Oscar Grönberg (a member of Norway's Friends & Neighbors and Hanna Paulsberg's Concept, appearing on their respective Øra Fonogram debuts, 2011's No Beat Policy and 2012's Walz for Lilli); guitarist Odd Steinar Albrigtsen (of the as-yet-unrecorded Norwegian trio Hijack, as well as his own quartet); and bassist Peder Waern (of Sweden's Quiet Night Orchestra). Clockwork reveals its roots in American bebop, but with its own modern expression.

After years of playing together the quartet has formed its own solid aesthetic which includes balanced interplay, clever compositions that do not follow obvious narratives, patient, slow-burning structures and a clear affinity for calm, melodic articulations. This temperament is open to numerous variations. On Grönberg's brilliant "Valseri," the pianist's repeated, disciplined chords construct a subtle tension released by Albrigtsen's impressionist linear flights. Grönberg's playful, Thelonious Monk-like theme on the title track pushes the quartet towards a rare, urgent and muscular approach. Waern's "Slingshot" has a similar formula, stressed by a tight, swinging rhythm, while his "Festivus" revolves around a gentle, reserved theme explored on double bass with minor abstractions from Albrigtsen, Grönberg and drummer Truls Rønning. Albrigtsen's compositions—"Café Bentsebru," "Minor Leaps" and "Ballato"—feature his lyrical and highly melodic phrasing. His acoustic solo introduction for "Ballato," and later the fragile interplay that he develops with Waern, charge this beautiful composition with profound emotional impact.