By Victor Verney
December 26, 2012
Sign in to view read count 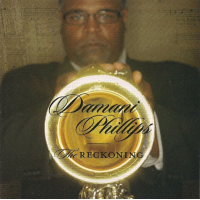 "Reckoning" is a complex word with many shades of meaning, an apt choice for reedman Damani Phillips' latest CD. As a noun, it signifies (among other things) an objective appraisal built with concrete facts. Used as a verb, the word denotes an educated guess based upon imaginative speculation.

In any case, it suggests calculation underpinned by trust—whether in others, oneself, or a Higher Power. All these meanings suffuse Phillips' new release, by his own account a leap of faith and in several ways something of a departure for him.

In contrast to the classical elements of his previous CD, The String Theory (Self Produced, 2010), this recording is unabashed post-bop. Backed by three of New York City's most accomplished session players, drummer Lewis Nash, organist Pat Bianchi and trumpeter Greg Gisbert, Phillips immediately sets the tone with the opening cut, Hank Mobley's "No Time For Squares." Gisbert's assured upper-register work is followed by Bianchi's angular lines and bracing chromatics, and Phillips demonstrates his ability to go "outside" without losing melodicism.

Phillips has said he wanted this CD to be "a harmonious blend of old and new," and the irreplaceable sound of the Hammond B3, nicely shaped by Bianchi's fresh approach, strongly contributes to a sense of modernism steeped in tradition. Bianchi, a devotee of Joey DeFrancesco as a youngster, has established his own voice as an organist—something not easily done—and gives ample evidence why many regard him as the Next Big Thing on that venerable instrument. On all seven tracks, Bianchi more than meets the criterion set by Jimmy Smith, who opined that any "real" B3 player should be able to handle the bass lines himself.

Phillips does go a bit off the beaten path with his choice of cover tunes, selecting lesser-known songs written by well-known players—certainly not standards, he grants, but rather personal favorites. The Billy Strayhorn ballad "Isfahan" is well-suited for Phillips' soulful exploration.

Kenny Dorham's "Lotus Blossom" showcases what Phillips felt was a calculated risk: his heretofore unrevealed talent at scat singing. "I was a bit apprehensive about the inclusion of scatting," admits Phillips, "but I've been sitting on that skill for a very long time. I figured it was time to let the 'cat out of the bag' and see where it leads me." Phillips' witty, exuberant excursion here may evoke Jon Hendricks for some listeners.

Discussing two of his own compositions, "One For C.P." (a reference to his late father Clarence, to whom the CD is dedicated) and "Sinister Intent," Phillips says that "they aren't the type of tune you'd expect to hear from me, but perhaps that's the point!" The former, a sophisticated, R&B-ish groove, features a Bianchi solo with a hint of Larry Young, another of his influences. The latter, driven by Nash's inventive off-beats, provides a fine example of Gisbert's expressive range.

Equally significant, if not more so, than the new directions these tunes portend for Philips, is the breakthrough that they, along with two other originals, represent: overcoming a self-described case of writer's block that had lasted several years. As its title suggests, "Shalom" has a subtle Yiddish flavor to its harmonies, and Bianchi's interplay behind the horn solos here bears special note.

Since 2008, Phillips, a Detroit native, has been a music professor at Grinnell College (pianist Herbie Hancock's alma mater), 60 miles east of Des Moines. His commitment to jazz education is shared by Nash and Gisbert, also known for their passion and dedication as teachers and clinicians. Beyond their obvious chops, their professional stature was an element in Phillips' calculations when choosing his sidemen.

"I'm trying to push beyond the 'regional' category," he noted, "and the best way to do that nowadays is to record with well-known cats." Few are better known than Nash, whose rich melodic sense and unique style shines in every track. Phillips credits a mutual friend, drummer Charles Hopkins, with introducing him to Nash, said to have one of the longest discographies in jazz. "We talked about what I was hoping to do...on the album," recounts Phillips. "I was absolutely ecstatic when he agreed to play the session."

In Bianchi's case, he and Phillips became acquainted in Colorado; Bianchi was a mainstay in Denver's jazz scene before moving to New York, and Phillips earned his doctorate at UC-Boulder. According to his liner notes, Phillips had been discussing the possibility of a recording project with both Bianchi and Gisbert for some time, and he expresses delight in finally seeing those speculations come to fruition.

Summing up the results, Phillips says he came to the realization that he needed to trust his instincts, embrace change, and follow his heart. The rewards, as this stellar effort shows, can be well worth the risks.

Tracks: No Room For Squares; One For C.P.; Shalom; You Are Who You Are; Sinister Intent; Lotus Blossom; Isfahan.

No Room For Squares; One For C.P.; Shalom; You Are Who You Are; Sinister Intent; Lotus Blossom; Isfahan.