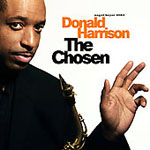 Donald Harrison's The Chosen is dedicated to the people who do their "best, no matter what circumstances come" their way. If you know anything about Harrison, you know that he's from New Orleans and suffered significantly after Hurricane Katrina so he knows what he is talking about. This collection of originals and standards displays Harrison as a saxophonist who prefers the honest, direct route to musical expression. Though there are some intricate approaches to the material, all the pieces display the agile and muscular (as well as sensitive) alto playing of the leader. Even though the references to New Orleans are throughout the CD, Harrison chooses to begin the CD with "Mr. PC," John Coltrane's minor key blues dedicated to bassist Paul Chambers. At one point the piece becomes a sax-and-drum duet (Joseph Dyson, Jr.), a very Trane-ish thing to do, yet the duo presents some very strong, unique musical ideas demonstrating they don't have to copy Coltrane and Elvin Jones to be in the tradition.

Another example of pushing the tradition forward is "If I Were a Bell," Frank Loesser's song from the show Guys and Dolls, made famous by Miles Davis on Relaxin' with Miles (Prestige, 1954) and since then a jazz standard. The leader literally extends the tradition of this tune by playfully elongating the final measures of it (aka tagged). The extra measures get used in the improvisations, giving the soloists—Harrison and pianist Victor Gould—that much more harmonic fuel for melodic surprise. Harrison is so inspired, he quotes Ellington's "Rockin' in Rhythm." "To Nola with Love" is a very slow, musical love letter.

Harrison is right in that lineage of saxophonists as testifiers: Stanley Turrentine, Gene Ammons, Cannonball Adderley, Lou Donaldson and Charlie Parker. Speaking of Bird, Harrison covers one of the legend's greatest performances from Bird with Strings (Tristar, 1994), "They Can't Take That Away from Me." Other highlights on this solid CD include Ellington's "Caravan," the title track and "Drum Line," which exhibits some deep groovin' between Harrison and The Old School Drum Line from New Orleans.

Mr PC; The Chosen; If I Were A Bell; Caravan; They Can't Take That Away From Me; To Nola With Love; The Right Touch; Urban Serengeti; Drum Line; I'm The Big Chief Of Congo Square.