The Bad Plus with Wendy Lewis: For All I Care

BY MATT MARSHALL
February 22, 2009
Sign in to view read count 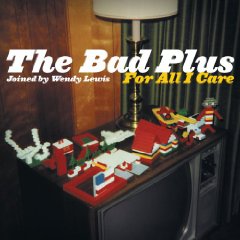 The recordings of too many contemporary jazz singers teeter precipitously on a cliff overlooking the meandering river of easy listening. Jane Monheit and her ilk sculpt with cake-icing spatulas, decorating standards and new material alike with a thick sheen of creamy frosting. Those who might reasonably lay claim to being the musical descendants of Billie Holiday and Louis Armstrong are, more than likely, singing rock.

With For All I Care, The Bad Plus asks, "What's the difference?" Following on the heels of 2007's acclaimed Prog (Heads Up), Care goes farther afield than the band's previous work, culling music from the camps of artists as divergent as Igor Stravinsky, Waylon Jennings, Wilco and the Bee Gees. Joining them for the adventure is Wendy Lewis, a dynamic singer from the Minneapolis alt-rock scene.

From the opening vocal strains of Kurt Cobain's "Lithium," presented as a halting time massage, Care gives notice that it isn't your granddaddy's jazz record. Lewis' voice has a haunting, ethereal quality, but also carries enough weight and grit to scrape beneath the skin. Following, as she says, the lead of Frank Sinatra, Lewis sticks closely to the melodies and, like Sinatra, is never anything less than eminently believable. By metamorphic turns, she inhabits the defeatist angst of "Lithium," the tired longing of "Radio Cure" and "How Deep is Your Love," the raw emptiness that opens into sweet, heavy relief of "Comfortably Numb" and the lighthearted surrender of "Feeling Yourself Disintegrate"—all with an expansive voice echoing from the core of the 21st century's ever-more-virtual breath. It's impossible to imagine Monheit or even Cassandra Wilson pulling off these tunes. And they're exactly the kind of songs that jazz singers need to explore in order to be relevant to most of the population under 50.

Lewis is the perfect complement to TBP's music, filling the spaces too often left empty on the minimalist Prog without ever seeming like a forced overdub. Pianist Ethan Iverson's playing, perhaps inspired by the modern classical interludes of Stravinsky, Gyorgy Ligeti and Milton Babbitt included in this set, is angular and orchestral throughout, giving the songs sharp, jarring edges usually missing from the tunes' original recordings. As such, this record more than satisfies the jazz requisite of driving into songs at unexpected and illuminating angles—preferably, as in cubism, from multiple angles at once. All but Heart's "Barracuda," which falters without a steamrolling guitar, are given new, dynamic—sometimes, thunderous—life here.

It will be interesting to see if other jazz or rock bands follow TBP's lead and use jazz, or jazz elements, to explore rock songs outside the canons of The Beatles and Radiohead. Will those other bands be as successful? Or does TBP have a unique gift of selecting rock tunes that can be converted to the jazz idiom? Or have they successfully argued that jazz—and jazz singing, in particular—can work with whatever material is thrown at it? The most refreshing quality of For All I Care is that it turns its back on such questions. Many will argue it's not even a jazz record. The Bad Plus couldn't care less.

Title: For All I Care | Year Released: 2009 | Record Label: Heads Up International