Charles Tolliver leads a modernist 16 piece big band that pushes the envelope of contemporary orchestral jazz sounds. The Big Band played a four night stand at the Iridium Jazz Club and I was fortunate to catch the second set on Saturday night. The Iridium is situated in Midtown Manhattan, just a few blocks away from Time Square, the tourist corner of the world. One would not be surprised if their schedule accentuated more commercial artists who are likely to have greater mass appeal. However, the club often features rather adventurous jazz artists such as Henry Threadgill, Cecil Taylor and the late Andrew Hill. Their booking policy has not changed despite variable turnout. On this occasion, the club was about 75% full. Nevertheless, the band enjoyed an enthusiastic reception for a fine performance. 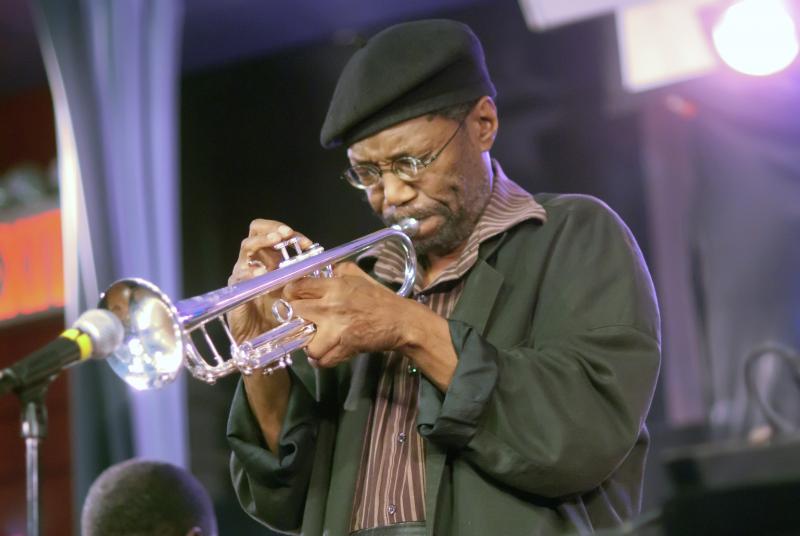 Tolliver, a gifted trumpeter, composer and arranger is a veteran of the jazz scene, getting his start in the 1960s. He has recorded with the likes of Jackie McLean, Max Roach and McCoy Tyner. He is most closely associated with pianist Stanley Cowell. They co-led a group for several years and founded a recording label Strata East. In recent times, Tolliver has been flying under the radar screen of even the more ardent jazz fan. I first saw him play with Andrew Hill a few years ago, shortly before the great pianist's death and was very impressed by his virtuosity and the originality of his conception. This recent concert at the Iridium was the first time I had the opportunity to see Tolliver leading one of his own groups.

ADVERTISEMENT
Tolliver, first assembled a big band in the early 1970s. In 2006, he reconstituted a big band and has since recorded two fine albums, With Love and Emperor March Live at the Blue Note released earlier this year. The current CT Big Band features an excellent ensemble of 16 musicians spanning three generations. The saxophone front line includes veterans Billy Harper, Patience Higgins, and Bill Claxton, all underrated artists who continue to perform at a peak level several decades into their careers. The similarly unheralded George Cables on piano was in just superb form and a standout soloist on this occasion.

The ensemble played thoughtfully arranged and orchestrated compositions, all but one penned by Tolliver. His music straddles the boundary between the big band tradition and more modernist (outward thinking) concepts. They opened with one of his signature compositions, "Ruthie's Heart," which dates from his celebrated 1970 big band recording Music Inc. The mid tempo number was a perfect vehicle for an outstanding and very soulful piano solo by George Cables which was reminiscent of early '70s McCoy Tyner. Bruce Williams followed with an intense and nakedly emotional alto sax solo. Williams is perhaps best known for his work with the World Saxophone Quartet. He joined that ensemble in 2001 and has appeared on their more recent recordings. The second piece was the Billy Eckstine classic, "I Want to Talk About You." It featured a gorgeous solo by Billy Harper which was a little brighter and faster than one may expect for a ballad. In general, the ensemble has something of a hard brassy sound without a lot of tonal color variation. The pieces are intricately orchestrated and Tolliver meticulously guides the band through each composition. Each piece offered ample opportunity for lengthy and varied solos. Even during the solo, the band continues to play throughout with undiminished volume and intensity.

The centerpiece of the set was the lengthy title track of the most recent album, Emperor March. The title was inspired the documentary "March of the Penguins" which recounts the annual heroic journey of the Emperor Penguin to its breeding ground in a bitterly cold and hostile climate. The driving number featured two of the younger members of the ensemble, Jason Jackson on trombone and Todd Bashore on flute (who also doubled on alto sax). The composition has a certain playfulness, but also intense drive. The piece features imaginative charts and the brass really got to shine. It also showcased the raw power of the 16 piece orchestra.

Ralph Peterson's assertive and relentless drumming was a constant throughout the evening's performance. He was the featured soloist on the final piece, a frenetically paced full throttle version of "Hit the Spot" (which appears on the album With Love) and he was just brilliant. And then for some reason the performance came to an end. It may have been the fastest 60 minutes I have ever experienced. It was an exhilarating concert of high energy music featuring an ensemble of excellent improvising musicians and creative compositions by a master in fine form. The Charles Tolliver Big Band is certainly an ensemble worthy of wider recognition and well worth seeing.