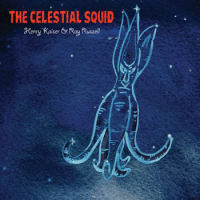 The Celestial Squid is an unprecedented summit meeting between two renowned guitarists: legendary British session ace Ray Russell and idiosyncratic Bay Area experimentalist Henry Kaiser. Although best known as a veteran studio musician, Russell's groundbreaking early records revealed a penchant for unbridled free jazz, culminating in his 1971 masterpiece Rites and Rituals (CBS). Since then, Russell has enjoyed a lucrative freelance career, working with artists ranging from Gil Evans to David Bowie, but other than a few recent fusion-oriented endeavors, he hasn't returned to the provocative expressionism he helped pioneer in the early seventies—until now.

Kaiser's reputation as an eclectic virtuoso of catholic taste is well-documented on numerous unclassifiable releases, including high-profile collaborations with many of his heroes, like guitarists Fred Frith, David Lindley and Richard Thompson. In the same cooperative spirit, Kaiser asked Russell if he wanted to revisit the sonic experimentation of his seminal efforts. The rest, as they say, is history.

It's not all Sturm und Drang though: the spectral euphony of the ethereal ballad "In Another Life" is hypnotically beguiling; and "The Enumeration" begins acoustically with Kaiser's introspective pointillism, slowly building in intensity to showcase Russell's blistering fretwork. "Disinterested Bystander" employs a bluesy, noir-inflected theme and a shuffling gait to fuel probing solos, culminating in Kaiser and Russell's most ardent interplay. The finale, "Conversation #14," is the most elaborate, composed and conducted by Allen using Cecil Taylor's intricate cell structure notation.

Although six-string pyrotechnics abound throughout the date, this is no mere cutting contest; Kaiser and Russell elicit some of the most inventively conversational guitar playing of recent vintage, bolstered by their bandmates' spirited contributions. Rivaling Kaiser's prior collaborations with fellow guitarists, The Celestial Squid ranks among his finest releases, and even more importantly, stands tall as a bold career milestone for Russell.