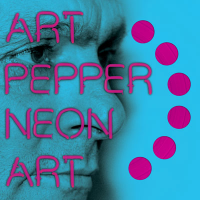 Hard on the heels of Neon Art, Volume 1 (Omnivore, 2015), Art Pepper's Neon Art, Volume 2 retains the first volume's rhythm section save for pianist George Cables taking the place of Milcho Leviev. This sets up and interesting contrast of piano styles while all else remains the same. Volume 1 was recorded from a single show at Seattle's Parnell's on January 28, 1981. The selections making up Volume 2 were recorded in November of the same year while Pepper toured Japan for the last time.

Pepper recorded with many pianists, but none more effectively that Cables and Leviev. Leviev is a fiery iconoclast throwing provocative harmonic grenades at Pepper's feet, motivating the saxophonists with dares. Cables, Pepper's "Mr. Beautiful" is a highly empathic player, steeped in ballads and blues providing Pepper a safe place in which to create. Volumes 1 and 2 offer a fine contrast between the two pianists and the influences the pianists had on Pepper in performance. The results in both cases are illuminating in dramatically different ways. Leviev pushed Pepper to the edge, forcing him to deliver while Cables inspired Pepper to greater melodic heights.

Volume 2 assembles performances for three separate concerts on Pepper's last Japanese tour. "Mambo Koyama" is a Pepper original originally released on Art Pepper Today (Galaxy, 1978). Possessing a fiendishly difficult head, the piece descends into a two chord vibe perfect for funky soloing like that that of "Make a List (Make a Wish)" form 1979's Straight Life (Galaxy), which appears on Neon Art, Volume 3. This structure permitted lengthy soloing, so long in this case that the piece is faded out. Pepper and Cables rock once their groove is established. It is inspired and incendiary.

"Over the Rainbow" was a showcase ballad for Pepper during his entire career. He typically performed a lengthy solo introduction when he played it, this performance being no exception. Using this Harold Arlen chestnut as a vehicle, Pepper pours himself out like some strong spirit, rich in pathos and dense with gravity. On "Allen's Alley" Pepper proves that he lived the bebop life and was able to converse in its intricate and complex language. Cables does an admirable job sweeping things along. Neon Art, Volume 2 adds the second pane to this jazz triptych, perfect in its imperfection and complete in its incompleteness.