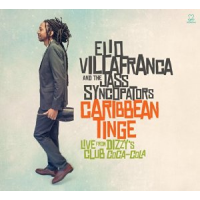 Ever since the jazz was created in the clubs and dancehalls of New Orleans, there was always a significant influence from the Caribbean region, specifically from Cuba. The island, which was just a ferry ride from the port city, had such a significant effect on the development of the music that Jelly Roll Morton always spoke of the importance of Afro-Cuban based rhythms (the Spanish Tinge) in creating and performing this nascent music. However, it was the arrival of a prodigious trumpet player named Mario Bauza from Havana who not only embedded himself into the swing band culture which dominated the Harlem music scene, he eventually blew up the whole cultural paradigm with his introduction of traditional Afro-Cuban music and rhythms into what was basically a blues/swing-based musical form.

Bauza's influence was such that he inspired a fellow trumpeter Dizzy Gillespie to eschew traditional swing in favor of developing an entirely new variation of jazz known as bebop. Gillespie, who was also intrigued by Afro-Cuban rhythms, created his own variation and synthesis of jazz and Cuban music eventually known as "Latin Jazz."

This art form along with the dance music known as mambo found a home among the burgeoning Puerto Rican community in East Harlem. American jazz musicians resisted incorporating Afro-Cuban music into their repertoire due to the complexity of rhythms and time structure (3/2 clave) which was a entirely different from 4/4 meters of swing and bop. However, musicians who played with Gillespie such as pianist Ray Bryant, bassist Al McKibbon adapted quickly to the Cuban sounds. While Bauza, who formed the first ever Afro-Cuban dance band with his brother in law Frank "Machito" Grillo attracted top flight players like Charlie Parker and Cannonball Adderley. Subsequently, when Gillespie brought Cuban drummer Chano Pozo to record and perform in his band, the die was cast for a completely new musical idiom.

It was this rich musical legacy that inspired young Cuban pianist Elio Villafranca to come to the States and play music. He first started performing in Philadelphia, which while it is removed from the center of Latin Jazz, still has a vibrant jazz community. He quickly made a name for himself as a highly versatile player who even though he was schooled in the musical traditions of his island, displayed an uncanny alacrity for bop and swing.

After a move to New York, Villafranca established himself in Latin Jazz circles. His debut recording Incantaions/Encanciones (Universal/Pimienta, 2003) was an international hit, being named as one of the "Top 50 Jazz Recordings." It is Villafranca's latest recording which is destined to place him as perhaps the most versatile and innovative pianists to come out of Cuba since Gonzalo Rubalcaba. In making Caribbean Tinge (Motema, 2014), Villafranca has created music, which is some of the most visionary intermixes of Cuban, Dominican, and Puerto Rican music with American bop and swing.

Villafranca based his concepts on the "Spanish Tinge" infusion with traditional New Orleans jazz. Even his band name Jass Syncopaters was inspired by the Duke Ellington Serenaders aka "the colored syncopaters" and draws upon the historical influence of Afro-Cuban/Caribbean rhythms on the inception of jazz music. The recording took place in October of 2012, at Dizzy's Club Coca-Cola at Lincoln Center which is arguably considered America's "Vatican of Jazz." Villafranca enlisted an ensemble of solid veteran players to perform this complex music.

The set jumps off with the "Sunday Stomp In Congo Square," which is a dynamic homage to the site where slaves in New Orleans would dance on Sundays. The music itself is based on the yuba rhythm which originated in the Congo and brought to Puerto Rico and eventually New Orleans. The title tune which follows is an exciting exchange between bop and bomba where dynamics start off with a heavy tumbao on piano and percussions then jump off into a high tempo swing which features muscular horn work by Terell Stafford on trumpet and Vincent Herring on alto saxophone. The crowd was treated to an exhilarating turn by bomba dancer Julia Loiza Gutierrez Rivera. Another highlight of this date is the haunting " Flower By the Dry River" which is also based on bomba rhythms. Villafranca hints at a possible African influence on Argentine tango, "Two To Tango." The set closes out with "The Source In Between," is based on the Cuban tresillo rhythm also closes with Willie Jones III laying out on the drums.

Another highlight of this date is the battery of master drummers Anthony Carrillo , Jonathon Troncoso, Juango Gutierrez, Nelson Gonzalez, Camilo Molina-Gaetan who are equally adept at performing the wide range of Afro-Caribbean rhythms and infusing them into the bop/swing idiom. With Caribbean Tinge, Villafranca has changed the parameters of what constitutes Latin Jazz, and how deep an effect the "Spanish Tinge" has had on the evolution of American jazz.