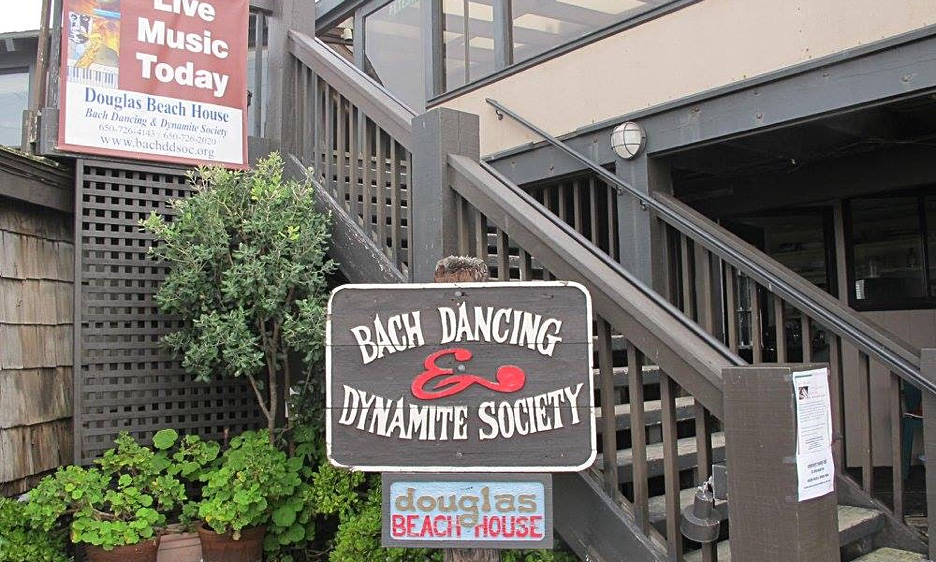 If you want company, build a beach house and they will come. —Pete Douglas

Heaven for some is a baseball diamond in an Iowa cornfield. For Pete Douglas, it was a house on a beach with a jazz club in his living room, a would-be heaven also for anyone who dropped in. Douglas passed on, in 2014 at age 85, sitting at his desk overlooking the Pacific Ocean. But his vision lingers at the Bach Dancing & Dynamite Society, aka the Douglas Beach House, at Miramar Beach on Half Moon Bay in Northern California about 25 miles south of San Francisco.

The facility closed for about a year after Douglas' death, amid questions as to whether a venue so closely identified with its founder (it had been, after all, his actual house! ) would continue. It had been his labor of love. Middle daughter Barbara Douglas Riching, who had developed a career in corporate finance, methodical and kind of an opposite to her father's beachside bohemianism, stepped up to buy the house, with payments financed into the future to her two sisters, and to lead the nonprofit organization that is the operating business structure.

"The sisters all recognized a value in his legacy," Riching recalls, "and it kind of fell to me to keep it going. When I see the joy in people's eyes, it affirms that there's something really special here for others." So jazz on select Sunday afternoons, four seasons of more than a half dozen concerts each throughout the year, continues, as it has since 1964.

What Pete Douglas created continues in a wood-paneled listening room, with space for 200 guests on the main floor and a balcony loft above. Right across the street is the ocean, you can step directly onto the beach; immediately to the northwest and visible on a clear day or through the coastal fog can be the mega-waves of the surfing site known as Maverick's.

Natural light pours in through large windows facing the water. Food and beverages are available buffet style; people also picnic on-site or nearby. Several levels of wood decks wrap the building M.C. Escher-like, up a wooden staircases from a streetside patio. What started as a run-down beer joint with family sleeping space in the back is now a million-dollar-plus coastal property based on location alone, jazz added.

Despite the club's long history, it is still kind of a mystery spot, even among jazz devotees in the San Francisco Bay Area. Many have heard of it, but never been there. It's on a stretch of coast known more for artichoke and pumpkin farming and weekend getaways than for top-flight music. It takes a bit of discovery to find, about two miles south of the harbor at Princeton-by-the-Sea: an easily-missed turn off of Highway 1 onto Magellan Avenue (named after the Portuguese explorer), then a turn onto Mirada (Spanish for "look," always a good way to find), and suddenly there it is: a gem resplendent, heaven-sent.

Some think it is a private organization, a "Society" open only to members, weirdly mating Bach and dancing in its name yet presenting mostly jazz. It does have tax-deductible memberships, with advance ticketing privileges, but this bit of heaven is open to the public.

One of Douglas' jazz aphorisms, Number 81 from a list of 153 on the Beach House website, is "If you want company, build a beach house and they will come." In 1957, Douglas bought a building that was not much more than a shack, a former beer bar, and moved in with his wife and young daughter. The beer joint was converted into an oceanfront cottage.

For Douglas, it offered a classic beat fantasy of his own: "the gritty coffee shop, the jazz trio." In his late teens, he had wandered in to what became Howard Rumsey's Lighthouse Café in Hermosa Beach, which similarly had been a broken-down sailor's bar steps from the water and begun offering jazz to fill an otherwise empty space. That tableau entranced Douglas, and later invoked dreams to recreate it in a place of his own.

But Douglas had not envisioned himself as a jazz entrepreneur. Music at the Beach House began in 1958 when Douglas, then armed with a sociology degree and working as a probation officer, encountered a teenage probationer who brought a saxophone into their meetings because the fellow's car wouldn't lock. Douglas took a shine to the young man, who had been convicted of stealing a package of baloney, and knew the kid was no kind of criminal. He invited him out to the beach to play; the youngster showed up with other musician friends and jam sessions were born.

That probationer grew up to become Pat Britt, Los Angeles-based saxophonist and producer for jazz reissues under a reincarnated Vee-Jay label and original jazz recordings for Catalyst. Tim Jackson, who went on to open the Kuumbwa Jazz Center further south in Santa Cruz and become artistic director of the Monterey Jazz Festival, started out as an apprentice to Douglas, living out of a Volkswagen van and a sleeping bag on site in trade for working as janitor and ticket-taker. Jackson, who played flute and surfed, was drawn by the waves and stayed for the music. Jackson still serves, now on the nonprofit's board of trustees.

Douglas from the beginning had a kind of open-door policy, inviting in various characters, wanderers, and explorers from many directions passing by, drawn by the beatnik spirit of the time and the music scene. Today that vibe continues as much as it can in this era, including listeners of all stripes, as cool and comfortable and engaging as one may wish for a coastal afternoon. Another of Douglas' jazz sayings, Number 7 of 153: "Hanging out around live music is not a waste of time, as one might have a serendipitous experience." The music may require great attention, but all is otherwise relaxed.

After parting company with the probation department, Douglas worked for the San Francisco welfare department, then transitioned into work as a mortgage broker, real estate agent, and property inspector. The jam sessions continued informally. On the suggestion of a lawyer, a savvy Douglas registered his operation as a non-profit organization in 1964 with the purpose to bring jazz and classical music acts to the public. In 1965, he added a 3-bedroom/2-bath house onto the cottage, and in 1966 opened as the Bach Dancing and Dynamite Society charging admission.

In 1968, he had begun offering the space also for weddings, parties, anniversary celebrations, and other events. In 1971 Douglas expanded the facility again, adding a more dedicated listening space with a raised ceiling, balcony, improved lively acoustics, bar seating, and the view of the Pacific.

His jazz aphorism Number 84 states that a small listening venue needs a subsidy over and above ticket sales. Number 85 observes most venues are partially supported by drink and food sales that often distract from the music, but for the Bach, the subsidy was renting the facility for wedding receptions. By 1975 he was fully in the wedding business, doing 40 or so a year, as an adjunct to the music. Without being underwritten by the weddings, there would have been no jazz scene. Wedding, party, and meeting rentals of the space remain important to its continuation now.

The mind-twisting name Bach Dancing and Dynamite Society is a kind of faux-pretentious nonconformist absurdity. It arose out of an informal party in 1963. A small group of friends was hanging out on a Sunday afternoon in what had been the original beer joint, drinking and listening to recorded music. Some folks came by with some actual dynamite and suggested exploding it on the beach. The original guests declined to join in, and the dynamiters went off to do their deed. Meanwhile, back at the party, in a change of mood, Douglas put on a recording of Bach's Brandenburg Concertos. Someone perceived the music was in 4/4 time, and suggested dancing to it, in a form of West Coast Swing.

Soon came an explosion on the beach. One guest, upon hearing the blast, dubbed the crew the Bach Dancing and Dynamite Society. Douglas recalled, "Of course, we were anything but a society, and fancied ourselves Beat Hipsters of the Fifties who looked with bohemian disdain on any social conformity." Douglas put a sign out in front bearing the incongruous moniker, and the name stuck. Its illogic had a certain allure.

Decades after his place had become upgraded to more of a club and less of a clubhouse, Douglas wondered to a local magazine whether potential listeners thought the house experience was too personal, that they were cautious about entering "Pete's Place," concerned whether they were sufficiently "inside" the scene to belong in the home of "an eccentric nut who does music in his house." Douglas was a salty character, usually wearing a knit seaman's cap at a jaunty angle, smoking a pipe, a jazz Popeye (as Etta James called him), irreverent except for his dedication to the music. Those wary on the outside need not have worried; once in, you are in, and those who are out are unfortunate.

When Douglas died, questions for the daughters were whether they had inherited a white elephant, more troublesome to manage than useful, or even a dinosaur, amid changing musical tastes, well-regarded but of a gone scene. The Bach had been their Dad's pursuit and not their own, although it was the place of their own formative years, where they had been raised and where chores included setting up the venue. Barbara Riching recalled to the San Jose Mercury News that Douglas' welcome to others sometimes had the girls jealous for his attention. But Riching says that as she grew older she came to appreciate what her father had created, bringing into their home the world's greatest jazz performers.

"He wasn't the kind of dad who took us fishing or hiking. He hated to be hugged, even to the end. But he did give us all this music," she remembers. His trademark cap and pipe, the actual worldly relics, are brought out by Riching before most concerts and placed on a windowsill to the left of the stage where Douglas normally sat. His hat and pipe are thus still there, just as he always was. "Dad had kind of a ritual as to where he sat, so it's still a bit of a ritual to put his hat and pipe there," Riching explained. "It's recognizing that he is still with this."