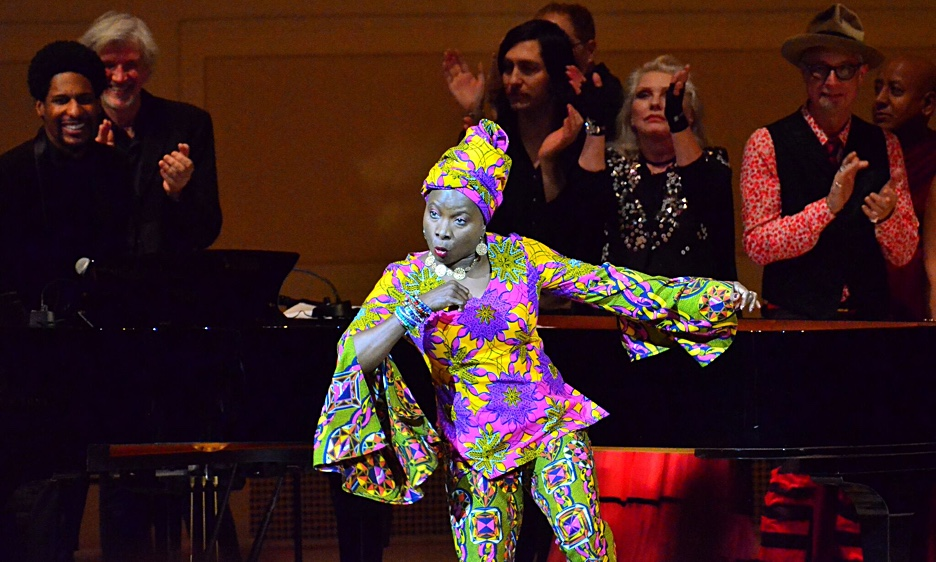 On Thursday, February 7, 2019, New York City's Carnegie Hall was alive with the essence of Tibet as it hosted the 2019 Tibet House U.S. Benefit Concert featuring an all-star lineup of artists. Philip Glass; Patti Smith and her band; Nathaniel Rateliff; Stephen Colbert; Jon Batiste; New Order; Jason Isbell; Debbie Harry; Angelique Kidjo; the Scorchio Quartet, and many others delivered a strong and powerful message concerning human rights during a performance for the ages.

In 1987, the Dali Lama, himself, the living symbol of the unification of the state of Tibet, founded The Tibet House U.S., which is dedicated to preserving protecting and empowering the unique and rich Tibetan culture here in the United States. Since that time, a yearly concert to raise awareness for Tibet House and the plight of the people of Tibet (who fled when their country was invaded by the Chinese in the 1950's) is held at New York's Carnegie Hall. The concert, curated by composer and Vice President of Tibet House, Philip Glass, always features a diverse and amazing group of performers who thrill the crowd with one-of-a-kind collaborations between popular artists and the world's greatest musicians. Past performers include a who's who of musical royalty that includes: David Bowie; Lou Reed; Iggy Pop; the Roots; Sharon Jones; the Flaming Lips; R.E.M.; Paul Simon; Trey Anastasio; Gogol Bordello and Shawn Colvin. The 2019 benefit concert celebrated the 32nd Anniversary of the Tibet House.

As in the past, the evening began with a performance by the Tibetan Monks and opening remarks by Tibet House U.S. President Robert Thurman. Glass then took over and introduced Laurie Anderson. Anderson's performance included a story about Yoko Ono screaming following Donald Trump winning the 2016 U.S. Presidential Election. She then encouraged the audience to scream at the top of their lungs for a minute. The ensuing screams and screeches were so loud that it would not be surprising if it was heard outside on 57th Street. She also talked about the concept of "feeling sad without being sad." Anderson then told a couple of jokes which gave the audience members a much needed chuckle and kept the mood light.

Tenzin Choegyal was up next. The Tibetan artist, composer, activist and cultural ambassador played "Heartstrings" backed by Glass on the piano, Leonardo Heiblum on tablas, and the Scorchio string quartet. This performance had the audience on the edge of its seats. The Chris Robinson Brotherhood followed him on the stage and performed "Forever as the Moon" and "California Hymn." Jason Isbell was introduced next. Isbell delivered a ten minute extended electric guitar solo that showed off his prowess and mastery of the instrument.

Nathaniel Rateliff delivered a three song mini-set that left the audience speechless. Rateliff performed "Still Out There Running," a stunning, soulful cover of Bruce Springsteen's "Atlantic City" (later in the evening, when told that the version of this song was outstanding, Rateliff mentioned that Springsteen, himself, had previously told him that he liked the cover) and an electrifying version of Sam & Dave's "Hold On, I'm Coming" on which he was joined by Jon Batiste. The audience responded with the first of many of the evening's standing ovations.

Glass followed with a version of his "Etude #10" that was so beautiful, mesmerizing and enrapturing that one could hear a pin drop. Patti Smith, whose appearance was a surprise, then took stage to recite a poem and was soon joined by the Patti Smith Band on a somber cover of Neil Young's "After The Gold Rush" and a fantastic version of Midnight Oil's "Beds are Burning." The Patti Smith Band then performed "I'm Free," a song written by Mick Jagger and Keith Richards which also gained modern rock radio airplay when it was covered by the Soup Dragons. On this evening, the song was augmented by the smooth segue in and out of Lou Reed's "Walk on the Wild Side." New Order members Bernard Sumner, Phil Cunningham and Tom Chapman were up next. The trio performed backed by an all-star band which included members of the Patti Smith Band and delivered powerful versions of "Love Vigilante" and "Ceremony" as well as an epic version of David Bowie's "Be My Wife."

Debbie Harry looked resplendent in a sort of flamenco-ish black-and-pink taffeta ensemble featuring rhinestones and a cape with words "Stop Fucking the Planet" on the back. Harry re-imagined Blondie's "Heart Of Glass." The new wave anthem was delivered as a slow, sad and sentimental mash-up featuring the Scorchio Quartet.

Stephen Colbert, accompanied by Glass on piano, performed next. He surprised the audience by not delivering a monologue. Though he didn't directly go for the laughs that he provides nightly, he did deliver a very relevant statement regarding the current political climate by reciting Allen Ginsberg's dark poem "Birdbrain."

Jon Batiste, who on this evening seemed to be everywhere, played two stylish and graceful pieces "Opening" and "Don't Stop" on the grand piano. At the end of his performance, Batiste received a standing ovation and took his bows.

Glass then appeared and stated that many people ask how in the world he chose the lineup and picked the concert's final act. He said that with talents like Angelique Kidjo it was easy. Kidjo, then commanded the stage and performed a high-energy version of "Malaika." For the finale, Kidjo was joined on the stage by the evening's other performers for an African-influenced cover of "Once in a Lifetime," during which she danced her way all over the famed venue's stage, ripped off her headdress and draped it around Batiste.