Home » Jazz Articles » Ustad Saami: God Is Not A Terrorist

Ustad Saami: God Is Not A Terrorist 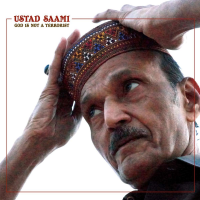 God Is Not A Terrorist is by no stretch of the imagination a jazz album, but it contains deep and authentic music and will appeal to some AAJers. Ustad Saami is a master of the Pakistani vocal style known as surti, which is characterized by its use of microtones. Microtones are widely used in music throughout Pakistan and India, but surti is a distinct tradition, dating back to pre-Islamic times. Saami's voice is the focus of the music, accompanied by harmonium, tamboura and tabla. You do not need to understand the lyrics to enjoy the singing. Beauty always reveals itself.

Surti's use of microtones links it to several jazz (or perhaps beyond-jazz) musicians including the trumpeter Jon Hassell. In 1972, on a European tour with La Monte Young, Hassell heard the Indian singer Pandit Pran Nath, who was performing on the same concert programme in Rome. Encountering Nath's microtonal style was a paradigm-shifting experience for Hassell, and he persuaded Young and another collaborator, Terry Riley, to join him on an extended trip to India to study with the singer.

Hassell's unique, transcultural approach to the trumpet—raga-like, microtonal, half sung and half blown, breathy and allusive—developed out of these studies. He introduced it on record on Vernal Equinox (Lovely Records) in 1978 and, while his productions (like the technology which enables them) have become more sophisticated since then, Hassell's trumpet style has remained fundamentally unchanged. His career-defining Listening To Pictures (Pentimento Volume 1 (Ndeya, 2018), is shot through with microtonal inflections.

Which bring us to back to Ustad Saami. The singer and composer literally risks his life daily in Pakistan to keep surti alive. Like all music the style is regarded as blasphemous by Islamofascists, who have murdered several dozen musicians (and dancers) in the country since the turn of the millennium. Many others have been cowed into silence. Saami remains defiant. He is said to be the only practitioner of surti left in the world so, when he passes, or is assassinated, the music may die with him.

God Is Not A Terrorist is the fifth album in the Glitterbeat label's Hidden Musics series.

God Is; My Beloved Is On The Way; Twilight; Hymn; War Song; Longing.