By Clifford Allen
September 17, 2010
Sign in to view read count
What is improvised music without visuality? While the music of improvising composers can be felt and picked apart aurally, the physical act of making music in an un- preconceived setting is something rather extraordinary and easily lost through the audible distance of a recording. It's not just the dynamic, theatrical high jinks of a player like percussionist Han Bennink or ferociously deft fiddling of bassist Barry Guy (with his table of accoutrements at the ready). That visualness can be in the arrangement of players and their standing, sitting or moving bodies in relationship to the room's acoustics. Still, there are some musicians whose art clearly exists on both an aural and visual plane which can only intersect within the realm of live performance.

Percussionist Tatsuya Nakatani, born in Osaka, Japan and currently based outside of Philadelphia, is one of these artists. His array of percussion instruments, not to mention the athleticism with which he engages them, is extraordinary, including small metal bowls, gongs, broken cymbals, homemade and rather sculptural bows, tom and snare. Awareness of what sounds are being produced by which instrument or act is not absolutely necessary to experience his music, and in fact, an auditory experience can be impregnated with comparable weight and a sort of "visual palimpsest." Listening to Tatsuya Nakatani's percussion and sound creation hits on a number of intersecting sensory paths. 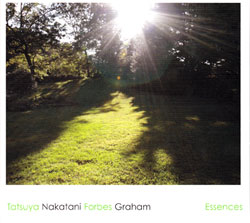 Essences is a duo summit between Nakatani and Boston-based trumpeter Forbes Graham, who has worked in settings that explore both sonic minutiae and full-bore improvisation (the Weasel Walter / Marc Edwards group, for example). "Cardamom" begins with a pinched call, at once cutting and fragmenting as Graham's whine splits into multiphonics, accompanied by the midrange tear of battered cymbals scraped across a tom. It's a fair guess that just as Nakatani's palette includes a somewhat dismembered approach to the traditional kit, Graham is also amplifying his brass range by blowing into the trumpet's parts as they're disconnected from one another. This could be mere breath in piping, creating a high and distant voice in stark contrast to the thick bowed resonance of Nakatani's kit-fiddle (on "Sandalwood," he approximates a bent metal bass). For the latter, between selecting and unselecting pieces of metal, dropping them on surfaces and bowing, there is a loose sense of rhythm that's created mainly in the relationships between actions and their resultant sounds.

"Vanilla" is a slightly more aggressive tread down a similar path to the opener: furious whine and elemental, metallic surging a ground for Graham's throaty streaks. Piccolo twitter, condensed growl and fluff in a stubby cycle soon become near-anguished clarion on "Lavender," Nakatani dropping occasional bombs while keeping a continual bead on an array of chime-like bowls. The lengthiest piece on this set is "Myrrh," which finds Graham stretching out into a semi-familiar trumpet language, albeit one tempered with indeterminate mutes and feral buzz. Still, one can hear the Clifford Brown-isms pop through in curious opposition to a parallel field of percussion, only to be abstracted into taut circles as Nakatani builds up a lopsided, brushy patter and bright press rolls. Echoes of multi-instrumentalist Don Cherry's Mu duets (BYG,1969) with drummer Ed Blackwell briefly enter in the improvisation's closing minutes, the closest the pair ever get to cooking free-bop, albeit with a microcosmic sense of movement. 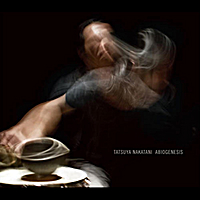 While he is an excellent duo and trio partner (the excellent group MAP with guitarist Mary Halvorson and bassist Reuben Radding), Nakatani's art as a solo performer is another thing entirely. Abiogenesis consists of 15 short sub- components arranged, like his live performances, in a near-ritualistic fashion. Nakatani starts with large bowed gongs, ceremonial instruments hung on racks and met with his homemade wooden bows, opening and closing many of his concerts (here they punctuate various points of the disc). This is sonically as well as visually significant; massive low tones and deep harmonics result from a horizontal pull as well as malleted push, and create a spatial as well as a bodily resonance (the latter noticeable even on headphones).

Abiogenisis is quite measured even as it hinges on clear physical workings-over—blowing on metal disks, a curdling punch to a floor tom, and an array of piled cymbals met with balance and clarity in blunt poise. Nakatani recently accompanied a yoga retreat in Houston, Texas, primarily on bowed gongs, which though not exactly producing "relaxing" tonalities, certainly serve to create centering feedback. When punctuated by occasional bass drum footfalls (as they are on the fifth track here), the cavernous metallic waves feel three dimensional, massive yet oddly comforting in its dynamic core.

A short and vicious workout for a smaller piece of bowed metal is more reminiscent of free-music bassists Peter Kowald and Buschi Niebergall than anything bow-happy percussionists such as Paul Lovens or Tony Oxley might do. Curiously, it's followed by an athletic kit piece, focusing on sharp, cube-like taps and occasional pitched planes—here quickly associated with the European junk-collector school. Combining large gong drone, furious bowing, and agitated stomps on the 13th section, Nakatani succeeds in blending the elemental with the expressive, building upon the previous gong pieces as well as serving to tie together the disc's significant strains. As an entry point to his world not to mention a significant solo percussion disc by any stretch, Abiogenesis is a fine set, though the relentlessly touring Tatsuya Nakatani should be seen live to complete the circle.