By Chris Mosey
September 18, 2010
Sign in to view read count 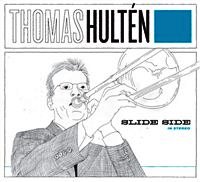 Thomas Hultén is a versatile, extremely busy and, presumably, God-fearing and honest young/youngish trombonist who started playing the instrument with the local Salvation Army band in his home town of Katrineholm, Sweden, at the age of 10.

Displaying a healthy disrespect for musical categorization, he went on to play with various symphony orchestras in Sweden and Norway before, in 1997, moving to Houston, Texas. where, in addition to becoming principal trombonist with the Grand Opera/Ballet and an affiliate artist at Moore's School of Music, he now teaches low brass at a local Baptist University and Community College, and directs the Tomball College jazz ensemble.

Hultén also found time to play with artists including Ray Charles, Tony Bennett, Natalie Cole and Johnny Mathis; in so doing, the trombonist has built up a wide range of musical techniques.

So it is a great shame that on this, his first album—put together with diverse and equally gifted Houston colleagues—he has committed the unfortunate and, no doubt, unintentional gaffe of crediting himself as composer of a song that was written by someone else.

"David's Dance" is actually a reworking of the 1959 Reg Owen hit "Manhattan Spiritual." The song, based on a simple and very catchy riff, was written by the American pianist Billy Maxted, born Racine, Wisconsin 1917 and died Fort Lauderdale, Florida 2001. Tellingly, a version by British drummer Eric Delaney was a big hit in Scandinavia.

"David's Dance" is not an exact recreation of "Manhattan Spiritual." It has a less strict tempo than the original, but is so close—and with that familiar riff so much in evidence that, at the very least, Maxted deserves a co-composer credit. A video of "Manhattan Spiritual" is included at the end of this review as a way of slightly addressing a presumably unintentional injustice.

The other Hultén originals would appear to be, thankfully, just that. "Spring Activated" is a swinging, Count Basie-informed small group affair, featuring some nice, inventive and bluesy piano from Pamela Young and laidback tenor from Warren Sneed.

Hultén examines his Swedish folk roots on "Pilska Polska," where, once the jaunty theme has been stated (largely by the leader), there's a bit of a hiatus, in which the number almost grinds to a halt, but soon picks up again, with Young putting in some more sterling piano work.

The lyrical "Cambiando Camas" features a rather imprisoning string section, though Sneed manages to break loose with an excellent solo. Toots Thielmans' "Bluesette," which follows, makes a relaxed contrast, with Mike Nase's rhythm guitar and Andrew Gordon's bass gently pushing the tune on its way.

"Ike," another original, is funky, while "Stardust" is rhapsodic, but the standout track is the lovely 1928 ballad "If I Had You." Beautifully arranged/played by Hultén, it's not to be confused with songs of the same title by The Carpenters, Debbie Harry and Adam Lambert. "David's Dance" is also excellent, but it's a real shame about that uncanny resemblance to "Manhattan Spiritual."