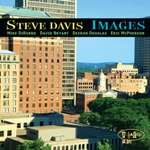 It is easy to mistake trombonist Steve Davis for an aesthete—which he is, possessing an undying sense of lyricism to show for it. But he is a deeper musician than one who merely subscribes to the aesthetical philosophy. Each of Images' ten compositions far transcends warmth and lyrical beauty, standing out as astute forms of modal music that recall the finest of their kind. Davis' ability to enrich the tonal palette of the trombone is commendable. He may not bend and twist the voice of perhaps the most human vocal-like instrument, as Roswell Rudd does. He may not reach into the thin upper registers of the instrument, as Bill Watrous does. Even though he stays fair and square within a comfortable zone— relying, if anything, on an innate bias for the bass register—Davis adorns the sound of the instrument with a husky sensuousness. He caresses, rather than simply playing, the notes. He constructs his solos with breathtaking curvilinear phrases that melt into one another, sometimes holding a note like a spinning top, before letting a cascade of others in a new idea fall on the B side of a solo.

Images has something else to offer. This fine album is played as a loosely connected suite of music dedicated to some fine aspects of Hartford, Connecticut, the trombonist's home and a place which offers him a slew of memories from which to draw. The interesting aspect of drawing on them for a musical tribute is that the narrative in each pays close attention to the characters that drive each story. As a result, there is a distinctly individual flavor to each part of this suite.

"Nato" is breathless and fluid, "The Modernist" is almost a clinical expression derived, no doubt, from the academic character of the Museum Curator, Chick Austin, of whom the music sings. "Twain's World" is by turns, impish and provocative. Similarly, "J Mac's Way" is blasé and harder hitting in parts, aptly describing both character and music of the late alto saxophonist/composer Jackie McLean. "Mode for Miantonomoh" is the high point of the work, a work of exceedingly beautiful melody and harmony. And so on, until "Kenney's" and "Club 880," which, like the best final movements in suites classic and modern, sound like a breathtaking climax and, written in their so-called jazz idiom, are fine jams that pulsate with excitement, closing this fine piece of work.

With Images, Davis builds upon his fine legacy of thought-provoking lyricism, as one of the finest trombonists playing today.