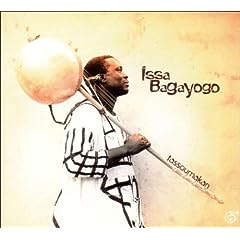 Studio tools offer both tools and temptation, and so artists who spend a lot of time in the studio had better be careful in how they use them. Mali's Issa Bagayogo spent plenty of time with buttons and knobs when he put together Tassoumakan, his third full-length recording, and the results reveal both the power and the drawbacks of the medium. Bagayogo sings and plays the kamele ngoni, a six-stringed lute-like instrument, drawing upon the skills of other musicians like guitarists Karamokou Diabate and Mama Sissoko to round out a full-bodied sound.

The first note on the recording comes straight from Bagayogo's ngoni, and it's a sign that he intends to use his lifetime of musical experience in Southern Mali to his advantage. As "Ciew Mawele" develops, you hear the artist riff along a loping groove whose repetition serves to heighten a feeling of meditation and discovery. A female chorus plays off and around his lines; a flute blows forceful spurts of energy into the affair; and then it's quietly over and out. As the recording progresses, a more potent Western dance flavor begins to seep through, whether the electro sheen of "Koroto," the funky house beats of "Touba" and "Kalan Nege," or the slow-jam lope of "Djigui." Studio production has the power to thicken texture (and it certainly does that here, through many layers); it also has a tendency to subtract from the music's spontaneity (which unfortunately happens here as well).

Oddly enough, Tassoumakan means "Voice of Fire," which isn't exactly the image that comes to mind when listening to these affable, groovy themes roll along. Bagayogo's voice is warm and insistent, adopting a rhythmic edge to round out phrases and emphasize counterpoint. He's most successful when he keeps the feel organic, as on the Wassoulou call-and-response patterns of "Numu," framed by accompaniment that hints at both ngoni and balafon. But obviously the production is key to making any of this music work, and given it's a product of Bamako and not Paris, it feels entirely authentic even at its most elaborate. This is home grown stuff, no two ways about it.