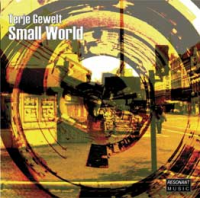 Some albums are destined for greatness on first listen. Others take more time to settle in, requiring a greater familiarity before they reveal their best qualities. While Norwegian bassist Terje Gewelt's new album Small World is somewhat underwhelming on first cut, subsequent listens reveal a richer experience. Marrying a looser Nordic rhythmic approach with the percussion-driven music of Brazil, Gewelt creates a hybrid that manages to remain playful without falling into more predictable patterns.

The approach is definitely percussion-heavy, with only Gewelt and guitarist Bjorn Klakegg providing harmonic and melodic form. But while there are often as many as three percussionists playing at one time, the overall ambience remains spacious, another feature of the Nordic cool that informs the entire recording.

Some pieces are more groove-oriented and, while the Brazilian influence is there, there's not a samba or bossa to be found. Instead, the influence is more in the ambience and some of the harmonic changes, as evidenced by "Lagoa," where Gewelt's more time-centric bass blends seamlessly with Robertinho Silva's drums and the insistent yet never overbearing percussion work of Carlos Negreiros and Kenneth Ekornes, creating a melodic backdrop for Klakegg's slightly overdriven improvisation. The title track finds Klakegg and Gewelt working over a beautifully orchestrated three-piece percussion section. "Second Orbit," while driven by a compelling percussion groove, is harmonically freer, with Klakegg creating swells and Gewelt approaching the piece from a less straightforward place.

What makes the album benefit from repeated listens is the way that Gewelt marries a more elastic time sensibility with an accessible yet less-than-direct structural sense. The four tracks featuring the master of implied time, drummer Jon Christensen, are arguably the highlights of the record. "As Raindrops Fall" is a rubato tone poem that could easily come from pianist Ketil Bjornstad's collaborations with Christensen. "French Waltz," more explicitly in time, still finds Christensen in a less revealing mood, while the structure of the song and Klakegg's warm tone have precedence in some of guitarist Mick Goodrick's more lyrical work.

"Drum and Bass" and "Nightfall," which are short duets between Gewelt and Ekornes, demonstrate how far Gewelt has come since his early days studying with Arild Andersen. While his deeply resonant tone clearly owes something to Andersen's similarly rich musical colour, he leans more to the abstract and impressionistic, often leaving as much to the imagination as is explicitly stated.

Small World is filled with subtle nuances and slight gestures, and it is precisely these qualities that make it worth going back to time and time again. What may appear on the surface to be an appealing but lightweight recording ultimately reveals a richer complexity that confirms Gewelt as a conceptual artist of depth and breadth.