BY KARL ACKERMANN
August 28, 2017
Sign in to view read count 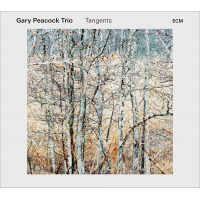 Considering his nearly sixty-five years of recording, Gary Peacock has been relatively selective in his choice of leader projects. His association with luminaries Albert Ayler, Paul Bley, Bill Evans and Keith Jarrett have put him in the company of jazz history makers. When Jarrett's Standards Trio, with Peacock and drummer Jack DeJohnette, disbanded in 2014 after over twenty recordings, Peacock launched his own piano trio with pianist Marc Copland and drummer Joey Baron. Tangents is the follow-up to Now This (ECM, 2015).

Not surprisingly, given their long careers, these musicians have crossed paths before the trio was formed. Baron and Copland most recently played together on John Abercrombie's Up and Coming (ECM, 2017), while Copland and Peacock have collaborated on a number of the pianist's trio releases on the Pirouet label, including Modinha—NY Trios Vol. 1 (2006), with drummer Bill Stewart and Voices—NY Trios Vol. 2 (2007), with Paul Motian.

Peacock contributes five of the eleven compositions on Tangents, with Baron and Copland contributing two and one, respectively. The album also includes the Miles Davis (and/or Bill Evans) standard, "Blue in Green"; a striking version of Alex North's "Spartacus"; and one group composition. "Spartacus," in contrast to the collectively free-improvised "Empty Forest," makes for an effective snapshot of the diversity of styles covered. Beyond that, there is the not-quite-pastoral resourcefulness of "December Greenwings" and the sharply executed, bleeding- edge energy of "Tempei Tempo," with great improvisations from all.

At eighty-two years of age, one need only listen to "Rumblin'" to hear Peacock solo like the ageless wonder that he is. In the Tangents liner notes, he embraces a forward-thinking approach to composing at this late stage of his career. Rather than finding a comfortable position, Peacock is much more inclined to experiment with freer forms. He has found empathic partners in Baron and Copland, who he senses as "having the same experience in the moment, feeling the music together."

Tangents has to be considered a highlight in the careers of all three artists, as the too-often hyperbole of creative improvisation is exchanged for masterful and unequaled demonstrations of the art—and one of the best piano trio albums in some time.