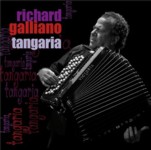 A little accordion can go a long way. Its sound is a knife edge away from a dolorous monotone, and stubbornly resists modulation. It is no accident that Argentinian tango, the style indelibly associated with the instrument, typically deals with loss and bad luck. Few accordionists are able to cast off this baggage, but Richard Galliano is one who can.

An inventive, virtuoso performer with solid jazz chops, Galliano is at home with a variety of atmospheres, including the happy and the carefree. Tangaria, recorded with his Tangaria Quartet and guest mandolinist Hamilton de Holanda—and previously released, without the closing "Tango Pour Claude" and "New York Tango," as Luz Negra (Milan, 2007)—finds Galliano roving widely across the emotional spectrum.

Despite the band's name, tango takes a back seat here—a third of the tracks plough the familiar furrow—and it's outnumbered by valse musettes, tunes derived from Italian and Brazilian popular song, and globally imagined originals whose provenance is harder to pin down. Some of the tunes are sorrowful, but just as often they are upbeat and gutsy. Most of the tracks, even the fairy tale-like arrangement of Erik Satie's "Gnossienne No.3," are driven forward by Philippe Aerts' energised bass. Higher up the register, violinist Alexis Cardenas is another visceral pleasure. An attacking player, whether in bowed or plucked mode, his improvisations, like Galliano's, strike a fine balance between muscle and melodicism.

De Holanda's inclusion is spot on. The combination of accordion and mandolin is a perfect marriage of opposites, in which the mandolin's percussive, non-sustained sonorities set off the langorous, drawn-out notes of the accordion. Galliano's and De Holanda's counterpoints add a splendid shimmer to "Tangaria" and the tenderly romantic "Sanfona," and the two duel fiercely on "Fou Rire" and "Sertao."

One small gripe: most of the tracks last less than four minutes, allowing only brief solos. Sometimes the tunes sound like postcards, when a discursive letter would be welcome.