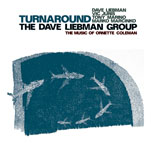 When listening to Ornette Coleman's music from the fertile period of his 1959-1961 Atlantic albums—beautifully documented on the aptly titled Beauty is a Rare Thing (Rhino, 1993) box set—it's perhaps a little difficult to understand what all the hubbub was about. As is so often the case, time turns naysayers into champions, and many of the people who were so vehemently opposed to Coleman's forays into the realm of free jazz are now amongst those celebrating him for the innovator he's always been. Coleman's writing from that time, his linear, largely non-chordal approach no longer feels difficult to digest. Time, in fact, has proven many of Coleman's compositions to be memorable for their compelling melodies, a fact not lost on saxophonist Dave Liebman and his group on Turnaround: The Music of Ornette Coleman.

That Liebman has chosen material largely from that two-year watershed is no surprise. Coleman wrote so many memorable themes at that time, especially the particularly haunting melody of "Lonely Woman"—played atmospherically here, with guitarist Vic Juris creating a wash of sound built from copious delay, reverb and other effects, while bassist Tony Marino's arco flesh out the pedal tone that supports Liebman's delicate wooden flute. With drummer Marko Marcinko gradually shifting from percussion to more turbulent kit work, the song ebbs and flows over the course of nearly seven minutes; remarkable, also, for its overall feel of "nobody soloing and everybody soloing" and some rich changes that Liebman's arrangement injects, in spots, to create an unfolding sense of tension and release.

It's the use of sophisticated harmony, in fact, that differentiates Liebman from Coleman—and, admittedly by Liebman, the reason why the free jazz icon had relatively little effect on his career. Liebman—splitting most of his time between soprano and tenor saxophones—respects the linearity of quirky tunes like "Cross Breeding" with Juris largely doubling the saxophonist's melody before everyone enters into a freer trajectory. But he also finds ways to apply his own passion for harmony. The one track not from the Atlantic years—"Kathelin Gray" (first heard on Pat Metheny's collaboration with Coleman, the career-defining Song X, reissued in expanded form by Nonesuch in 2005)—not only sports a new set of changes, but an acoustic guitar intro from Juris that, yet again, begs the question why he's not better known outside of musician circles.

If Juris and Liebman are the shining personalities in this group that they've always been, it's Marino who turns in, quite possibly, the performance of a lifetime. Always a firm yet pliant anchor alongside the equally flexible Marcinko, the bassist's opening salvo on the medley of the tribal "Face of the Bass" and unsurprisingly lyrical "Beauty is a Rare Thing" is a standout, as is the more driving "Una Muy Bonita," where Juris' strummed acoustic provides a distinctly un-Ornette backdrop for the bassist's lithe melodism.

It's one thing to pay tribute; another to turn the source material into one's own. Liebman and his group do just that on Turnaround, demonstrating that inspiration needn't mean imitation.