Judy Carmichael: Come and Get It 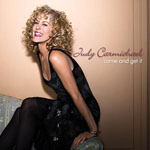 Judy Carmichael has been on the jazz scene for a long time. She has produced the radio series Jazz Inspired for a number of years and played piano for over a quarter-century with a number of CDs under her belt, most of them issued on her own label. Her specialties are stride and swing (one of her CDs was titled And Basie Called Her Stride), though this outing marks her debut as a vocalist.

With a strong band including saxophonists Mike Hashim and Nik Payton, cornetist Jon-Erik Kellso, guitarist Dave Blenkhorn and drummer Ed Ornowski, Carmichael's potent bass lines make an upright superfluous as she interprets a number of standards and jazz works from the Swing Era. Carmichael's infectious alto vocal is a highlight of the slinky opener, "All the Cats Join In" (with additional lyrics by Jessica Molaskey), though she cuts loose with a chorus of brisk stride before showcasing Payton on clarinet, followed by Hashim (on baritone sax) and Kellso trading licks. The solo interpretation of Duke Ellington's "Everything But You" blends her touching vocal with guest Tony Monte's swinging piano. Ellington's obscure "Wanderlust" features Hashim conjuring Johnny Hodges on soprano sax and Kellso saluting Cootie Williams with his muted horn.

Carmichael is very much in her element with a romp through Fats Waller's instrumental "Minor Drag" and the swinging treatment of the pianist's lesser-known "Come and Get It," the latter augmented by her sassy vocal. Trombonist Daniel Barnett is a guest soloist on "Love is Just Around the Corner," adding a friendly vocal as well. Carmichael's original "Boisdale Blues" is a playful, engaging stride vehicle performed as a duet with Blenkhorn.

All the Cats; Love Is Just Around the Corner; Memories of You; Gee Baby; Minor Drag; Come and Get It; Wanderlust; Boisdale Blues; Everything But You; Deed I Do; You're Drivin' Me Crazy; Christopher Columbus.