By MIKE JURKOVIC
March 1, 2019
Sign in to view read count 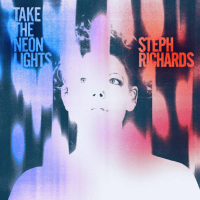 Trumpeter/composer Stephanie Richards kicks ass and she wants you to know it from the very first cutting, fluttering evocations of Take The Neon Lights' title tune/opener to the near "Taps"-like silence that closes things out, "All the Years of Our Lives."

With a colorful CV of playing alongside such boundary-busting, risk-taking players as David Byrne, John Zorn, Anthony Braxton, Henry Threadgill, Laurie Anderson, Jason Moran, and Yoko Ono, Richards comes by her thrilling avant-garde inclinations as a matter of hard fact. And it shows on every track of her challenging, tough-as-nails sophomore offering.

"Brooklyn Machine," its title taken from Allen Ginsberg's seminal 1958 poem "My Sad Self," starkly echoes Ginsberg's identity-crisis in a city teeming with anonymity yet allows the voices of her willing cohorts—pianist James Carney, bassist Sam Minaie and the roving articulations of drummer Andrew Munsey to accompany her deconstructed self (Richards took the slide out of her instrument to get sound through both the empty valve and her bell horn, mic'd both sources than mixed each sound left and right) for the song's spiraling romp. The active rhythm section is an intuitive addition to Richard's expansive vision; as it was on her first release, the experimental Fullmoon (Relative Pitch Records, 2018), where she invented resonating solos amid the throbbing electronics and samples of Dino J.A. Deane.

With all the tracks inspired by the poetry of such NYC chroniclers as Langston Hughes, Jack Kerouac, and Maya Angelou, Richards' concepts speak with an unchained language as she manipulates her instrument and compositions with a free-form plasticity that manages to startle on more than one occasion. Her doubling on flugelhorn and muted trumpet adds unexpected dimensions to the mix. Capturing NY in its many far-flung disguises, the wah-wahing "Rumor of War," "Transitory (Gleams)," and the elongated inversions and conspiratorial whispers of "Skull of Theatres" and "Stalked By Tall Buildings" not only demand repeated and concentrated listenings, but reveal an engaging and unapologetic young talent reveling in discovery.

Take the Neon Lights; Brooklyn Machine; Time and Grime; Rumor of War; Transitory (Gleams); Skull of Theatres; Stalked by Tall Buildings; All the Years of Our Lives.