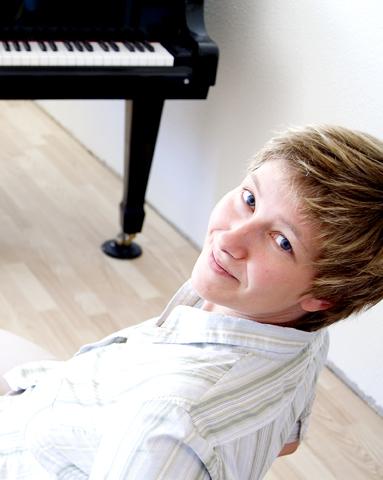 Ex-Brooklyn patriot, born in Iceland, jazz pianist and composer Sunna Gunnlaugs has released five CDs and performed in Europe, Japan, Canada and the US, combining the elegance of the European approach with a New York attitude.

Teachers and/or influences?
When I lived in New York I was very influenced by all the music around me and especially the fact that everyone was writing their own. I think my Icelandic background comes through in my music mixed with my New York influences. Some of my favorite artists are; Bill Evans, Bobo Stenson, Bill Frisell, Dexter Gordon and the list goes on.

I knew I wanted to be a musician when...
...I couldn't think to spend my life doing anything else.

Your sound and approach to music:
I try to approach it with no preconception and allow it to happen on its own.

Your teaching approach:
I try to emphasize that music should be fun. I try to get students to make it feel good and not be too concerned by the possibility of hitting a wrong note.

Road story: Your best or worst experience:
I think my absolutely worst tour experience was driving from New York to Detroit when the big black out happened. We were just outside Detroit when we were told to turn around. The venue had no power and wasn't expecting to have any until days later. Later that night when we found ourselves stuck in a small town in PA with a flat tire and no hotel room the club called "We got power! Where are you guys?"

Favorite venue:
I think that one of my more memorable performances was at the Montreal International Jazz Festival in 2002. My trio played an out-door concert for what seemed like thousands of people. We had great sound technicians and it was an awesome feeling to play under those conditions.

Your favorite recording in your discography and why?
I am of course very excited about my new recording Long Pair Bond. After years of playing with a quartet I revisited the trio format and really enjoyed it. As far as my older recordings Mindful has a special place in my heart. That band with Tony Malaby, Drew Gress and Scott McLemore was a tremendous ride.

The first Jazz album I bought was:
Bill Evans: You're Gonna Hear From Me.

What do you think is the most important thing you are contributing musically?
I think maybe someone else should answer this but if you insist I'd say sincerity.

Did you know...
I've always wanted to go to Tibet.

How would you describe the state of jazz today?
I think there is a lot of great music being made but we need more appropriate venues especially in the USA.

What are some of the essential requirements to keep jazz alive and growing?
I think the most important thing is that people go out and support live jazz in concert format.

What is in the near future?
I just released a new album called Long Pair Bond so I'm in full promotion mode regarding that, shipping CDs to critics, buyers and radio hosts. I'm working on tour dates in the US for next summer.

By Day:
During the day I work on booking my band and promoting my music. I also teach piano at two music schools and accompany vocal students.

If I weren't a jazz musician, I would be a:
Graphic Designer. I actually went to Pratt University and got a masters in Communication design.

Icelandc pianist and composer Sunna Gunnlaugs combines the elegance of the European approach with a New York attitude.