BY GLENN ASTARITA
November 29, 2011
Sign in to view read count
Track review of "Truth Is Marching In" 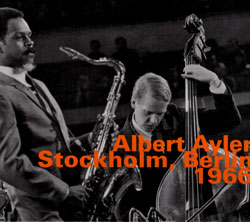 Indeed, a desert island quality album reissued with a digital uplift of celebrated tenor saxophonist Albert Ayler's 1966 Stockholm and Berlin concerts, where the artist resides in a very special musical space unlike any other.

With his infamous slants on America's historical affinity for march music, Ayler's colossal presence and coiling use of vibrato looms as a mighty force, to complement a dynamo band featuring brother Donald Ayler on trumpet. Sadly, the Ayler brothers passed on too soon and, in retrospect, the jury is out whether Albert Ayler's revolutionary concepts garnered the utmost critical deference spanning their relatively short run back in the 1960s. But history seeds the future, and Ayler's musical mindset has gained even more prominence and detailed investigation after his death.

"Truth is Marching In" could be a cleverly articulated slant on Stephen Foster or Daniel S. Warner's "The Truth is Marching On." It's a heavy duty yet harmonically enticing ballad, sprinkled by the saxophonist's authoritative spiritual presence overtop; a prayerful motif summoning Americana lore, where the resounding primary theme segues into a buoyant march-groove spiked with notions of triumph and turmoil. With brazen outbursts amid dips in the action, the band reenergizes via a sweet-toned finale.

Ayler inadvertently proved that the avant-garde should not be restricted to atonal or non-melodic content. With lushly organized melodies and cataclysmic breakdowns, his music projects a study in contrasts that parallel realism and life's incalculable abstractions.