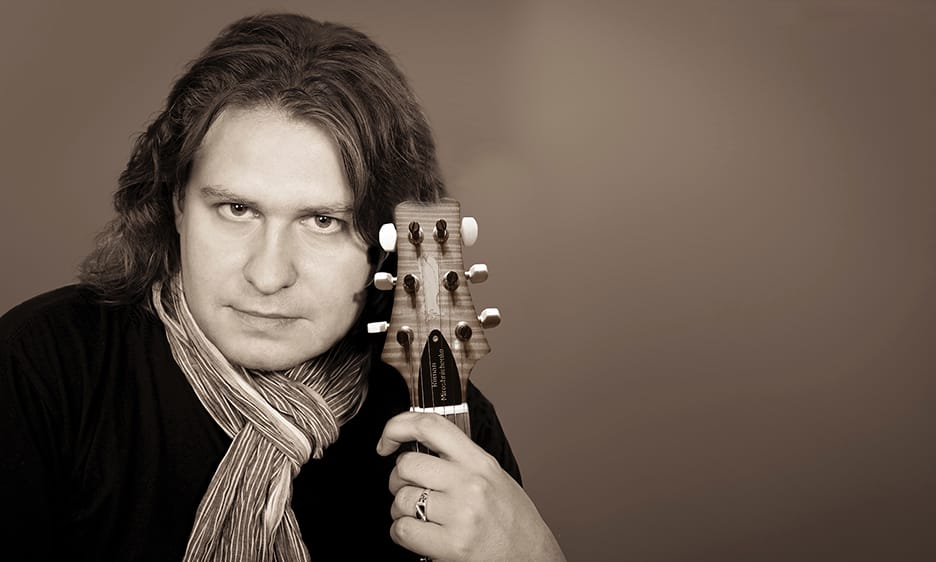 Roman Miroshnichenko is a virtuoso guitarist, one of the premier guitarists of the new generation of the jazz-fusion music. He has received a total of 30 nominations with 10 wins in multiple international songwriting contests and music awards throughout 2010-2020, including four The Independent Music Awards, 1st Prize of the USA Songwriting Competition, 1st Prize of the International Acoustic Music Awards. His soaring career as an artist includes numerous collective performances, and recordings with such world-renowned musicians as Steve Vai, Larry Coryell, Al Di Meola, Jennifer Batten, Marco Mendoza, Heather Headley, Paul Wertico, Djivan Gasparyan, Daniel "Pipi" Piazzolla, to name a few.

In 2013 Hal Leonard Books released The Great Jazz Guitarists encyclopedia, the most comprehensive guide to jazz guitarists ever published (from Django Reinhardt to Les Paul, Jeff Beck and beyond) with information about Roman Miroshnichenko.

Since 2017, Roman Miroshnichenko was an international projects director of the biggest in Europe guitar festival World of Guitar, held in Russia.

Acoustic and electric guitars. Regarding electric guitars, my favorite to this day: PRS Private Stock, hand signed by Paul Reed Smith and PRS Swamp Ash 25th Anniversary. Both are—jewels! I am very proud to be endorsed by PRS Guitars. If we talking about acoustic stuff, I have a few vintage Ovation guitars, which are amazing! Al Di Meola asked a few times to sell him one of them—black one, with really unique tone. Also, I have nylon string guitar custom build for me by Abraham Wechter. Spanish luthier Jeronimo Perez has developed custom made signature flamenco guitar with the piezo-midi pickup and built-in mic on-board. Another very special guitar from my arsenal is Gibson Les Paul from a very limited edition—just 25 of the Les Paul 1959 Reissues were made, and named in honor of Vic DaPra—author, guitar aficionado, expert on Les Paul guitars and appraiser for collectors, such as Jimmy Page and Robby Krieger. One of the other lucky owners of Les Paul's from that edition are Cheap Trick's Rick Nielsen and Mick Ralphs from Bad Company.

I was heavily influenced by John McLaughlin, Paco de Lucia, Larry Coryell and Al Di Meola. And I was lucky to play a few times with Di Meola. Also, I frequently played in a duo with Larry Coryell. We did a few tours. Larry helped me find my own style. I also had the honor to collaborate with Larry on his symphonic projects. In May 2017, Larry's last opera, based on Leo Tolstoy's novel Anna Karenina, was presented, featuring the Moscow Symphony and our guitar duo with Serbian classical guitarist Nenad Stephanovich. This opera was completed by Nenad and myself after Larry's passing.

When I turned 14. Until that moment, I was very seriously involved in football, but at some point I got my hands on a guitar from my older brother and I realized that I would be a guitarist and no one else!

I prefer the jazz concept. I always try to record solos with dramaturgy, following the best jazz improvising traditions. There are guitarists who make solos combining fragments, sometimes even using a bar by bar method. I prefer to play just straight from the beginning till the end without stops. This way takes quite a time but definitely not hundreds of doubles that fill up all the space on your hard disk. Everything has a limit, and there's no need to lose common sense. When working in the studio I often remind my colleagues that the best is the enemy of the good. On the stage I never flirt with public for applause using blanks and cheap tricks. I try to build each of my guitar solos with development and drama in the best traditions of jazz-fusion improvisation. Thus, the solo turns without "glossy pop sheen": you can hear drive, natural logic and emotions, but not just cold calculation. This is the way!

The venue I'll never forget—when I played with Steve Vai, my band and the 80-piece Russian Philharmonic orchestra at World Of Guitar festival 2015, in a high-energy festival setting that Vai calls "a highlight career moment." The performance included spirited takes on such Vai compositions as "Kill the Guy with the Ball," "Whispering a Prayer," "The Fire Garden Suite" and the finale, "For the Love of God." At the end of the show, we played his hit "The Crying Machine" and we had a real guitar duel just like Steve's was in the Crossroads movie. When I first saw this movie, I was just starting to play the guitar and would never have thought that in a few years we would be playing together!

I am really proud of my last album Ascension. The album was among the nominees in the 16th annual Independent Music Awards (Best Instrumental Album category). And of course newest recording The Sixth Sense. It's a very special album, recorded during an unprecedented time! I think this is my best recording with dream band mates. One of new album tracks "Bodhrán's Magic" was recently nominated for Hollywood Music in Media Awards. It was great to be nominated for this prestigious award!

There is still hope that the pandemic will decline by Spring 2021. The 24th international Guitar World festival, I manage international projects that are scheduled for the end of May 2021. One of the festival days will be dedicated to the centenary of Astor Piazzolla. I believe we will meet once again with his grandson—Daniel. He is great drummer and I love to play with him. I'm also getting ready for the tour as the member for CAB—Grammy-nominated jazz-fusion band by Bernard "Bunny" Brunel, who has played with various jazz legends including Chick Corea, Herbie Hancock, Natalie Cole, and Wayne Shorter. We just recorded the first track for CAB album and I'm really excited to continue this recording with Bunny. My new album, The Sixth Sense, has generated interest in Japan. So, after the international release on iTunes and Bandcamp, a large distribution of the special CD-edition of The Six Sense is making waves in Japan. Life is going on, despite the pandemic!