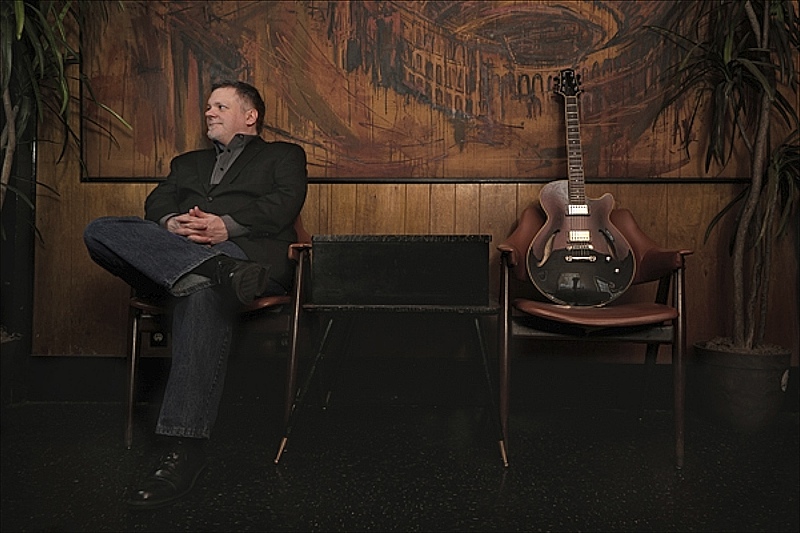 view slideshow
BY RIK WRIGHT
October 17, 2014
Sign in to view read count
Meet Rik Wright:
A graph of Rik Wright's influences would read like a wave, running a gamut from jazz to rock and back again. As a guitarist he has taken on influences, often subconsciously, as varied as Andy Summers of The Police and John Abercrombie. Compositionally speaking, Wright hangs with a different crowd altogether, mingling instead with the spirits of Charles Mingus, Thelonious Monk, and Miles Davis. Of this alliterative trio, Miles has been a decidedly conscious influence in terms of process. And in fact, as becomes obvious once you acclimate to its flow, Wright's improvising strikes more of an affinity with horn players than guitarists. As a relatively intervallic, melodic player he prefers his wheat brewed, not shredded. Wright bears the mark of a generation that burned bridges between genres. His latest recordings, Blue in 2013 and Red in 2014, build new bridges in their place.

Fundamental Forces has become the primary stage for its leader's compositions, taking his sound to a deeper and, yes, more fundamental level. The ensemble is a stunning collective of like-minded musicians that boldly follow Wright into haunting and often beautiful soundscapes. Fundamental, too, are the tunes themselves. Blending forward thinking arrangements with a core groove that listeners can tap their toe to, the music allures at every turn. That allure propelled Blue to #21 on the CMJ Jazz radio charts.

Your sound and approach to music:
That's a heavy topic. I guess a feel like a lot of jazz is over complicated. Some of it goes right over the heads of the audience, and becomes musicians playing for musicians.

In writing these most recent recordings, I have tried to strip down my composition to grooves and simple melodies. I try to give my listeners something to tap their toes to and a riff to get stuck in their heads.

That said, I have to pair that approach with my natural tendencies and talents. I tend to write deceptive rhythms that are tied over the bar line, with lots of back beats. I'm a relatively modal player -I tend to have the most to say when I improvise around the cycle of 4ths, and outlining chords in intervals rather scales. I'm much like a horn player that way.

I've also spent years developing my guitar tone and now recognize that no matter what gear you give me, I'm basically going to make it all sound the same. There's a particular sound I project, a wispy sound, with lots of delay and chorus paired with a sloppy aggressive lead tone.

It's just what I hear and I'm done with emulating others. I used to get hung up in being the best musician I could be, and now I've just thrown that away to focus on what it is I do uniquely. There is no need for me to sound like Wes Montgomery or Joe Pass. I just don't do that. Even though I borrow from them, I can't write and play like John Scofield or Bill Frisell. But they can't write and play like me either.

With my music I target people who wouldn't necessarily say they are jazz fans. They like music just as music and not a specific genre. They're okay with a punk sounding guitar over a Mingus tune. They're less interested in how well something is played than if it resonates with their emotions or not. They have fewer preconceptions.

And I'm hitting that target. I make an effort to play as many shows in general nightclubs as jazz venues and a large portion of our audience never frequents the other half. Those non-jazz fans tend to be a lot more excited about the music. They tell me how it makes them feel, what mood it puts them in, what's going on in their lives when they play it and why. They talk about textures and colors and rarely mention the guitar. I like it that way.

Your teaching approach:
I suck when it comes to teaching. I don't have the patience. I'd rather be in a room writing and playing than teaching others. I guess that isn't surprising. I've studied my entire life. In fact, I still take an occasional lesson. Everyone looks at the instrument differently and I always gain from learning someone else's approach. In my experience, however, I have noticed that the best teachers are rarely the best performers and the best performers are very often horrible teachers.

Your dream band:
I have the ideal band I would like to play with: James DeJoie, Geoff Harper and Greg Campbell. All musicians at the top of their game.

However, in terms of listening, I thought John Abercrombie, Mark Feldman, Marc Johnson & Joey Baron made pretty much the most beautiful music I have ever heard.

Road story: Your best or worst experience:
I was playing a casual one time and a guy came up during a version of "A Train" and started rapping over it. At least I think he was rapping, but you couldn't really tell because he didn't have a mic. He was just jumping around the stage like he was rapping and moving his mouth like he was rapping even though no one could hear it. When he was done, he tripped on a cord, fell over drunk, and spilled his beer on my amp.

Favorite venue:
Egan's Ballard Jam House in Seattle is my favorite to perform. It's a great small venue with a nice stage and is perfect for intimate listening.

On the other hand, Vito's in Seattle is my favorite gig to play. There's always a crowd, they have good food. The staff is a blast, the audience is always in a good mood, and they make excellent cocktails. They even pay a guarantee!

Your favorite recording in your discography and why?
Red, the most recent. We were on a tear in the studio. It's basically a live recording, a lot of it coming from a live performance on the Sonarchy Radio program broadcast on KEXP. We were just in a zone. There are a lot of rough edges but every player had something real to say on every tune. It's the spirit you hope for with every recording you make.

The first Jazz album I bought was:
John Coltrane, Ballads

What do you think is the most important thing you are contributing musically?
Me. Music is a conversation. I'm fun to talk to.

Did you know...
I'm an avid wildlife conservationist, a big supporter of Sea Shepherd -a marine conversation society that aggressively puts their lives between whales and whalers on the high seas.

Recently, I was out with some naturalists in the San Juan Islands and was one of the first five people to witness the discovery of a newborn Orca calf. It was the first calf of the Puget Sound resident whales in 2 years, amongst a declining population. A special occasion indeed.

How would you describe the state of jazz today?
In the midst of a midlife crisis. A bit confused. Searching for an identity.

What are some of the essential requirements to keep jazz alive and growing?
More music education in our public schools. More state-funded arts organizations. A network of small venues to allow young bands to tour inexpensively. More large venues that book local bands to open for national acts. More universities that will book small touring acts for sponsored performances.

What is in the near future?
The idea is to record one more CD from this batch of material. We had Blue last year, This year's Red, and we'll start recording Green next year. Then we're releasing a compilation of live performances recorded during the same time frame as the three CDs in a live disc entitled RGB. After that, I'm taking a long break. Maybe I'll retire. Who knows?

What song would you like played at your funeral?
"It's a beautiful day" by U2

What is your favorite song to whistle or sing in the shower?
"New Coat of Paint" by Tom Waits

What was your first concert?
KISS at the Capital Centre in Washington DC.

If I weren't a jazz musician, I would be a:
A poet, and probably a part-time business consultant for High Tech companies to pay the rent.