By Eyal Hareuveni
October 17, 2014
Sign in to view read count 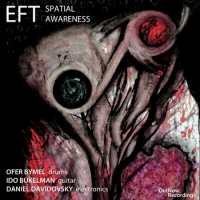 The third album of the Israeli Electro Free Trio—EFT—marks the constant evolution of this working band. This powerful outfit always searched for ways to blend on-the-spot free improvisation strategies with live electronics, noise and metal but now has reached a balanced interplay that stresses the original, constant-evolving voices of each of the musicians—guitarist Ido Bukelman, in his many solo projects, drummer Ofer Bymel, the drummer of choice of countless local experimental outfits, and electronics wizard Daniel Davidovsky, who keeps expanding his sonic palette.

Spatial Awareness was recorded live at Levontin 7 club in Tel Aviv on October 2013 and captures the experimental, slow-burning dynamics of the trio. Abstract sonic searches, fragments of white noise and concrete sounds and subtle rhythmic rustling evolve patiently until a common thread unites all into a rich and nuanced texture. On the beginning of this live recordings the aggressive interplay of former releases is transformed into an otherworldly update of the dramatic, atmospheric prog-rock suites.

But from the the fourth piece and on through the 21-minutes title piece EFT pushes harder. The abstract electronics become restless and tense, on the verge of explosion, the drumming is massive and the guitar lines are distorted and mutated. The tight interplay of the trio reaches its eruptive climax quite soon but still searches for higher, volatile catharsis. The sonic storm subsides on the short "Friend of No One But Your Phone" that highlights Davidovsky's inventive vocabulary but morphs again into a spare yet still powerful onslaught on the last "Circuit."