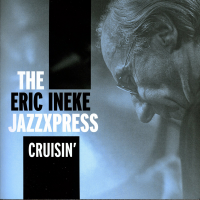 A strong hard-bop soul shapes this album. Throughout his long career, charismatic drummer Eric Ineke has shared the stage with many great figures from the 50's and 60's like Hank Mobley, Dizzy Gillespie and Freddie Hubbard. Ineke, an authentic musician, has consistently followed this beating-feeling and allowed himself enough freedom to develop it over the years.

Cruisin' is an energy explosion from beginning to end. The band, complimented by prominent Dutch jazz men, have established an original personality after six albums and hundreds of concerts together. For a listener, it is a pleasure to sense the pristine connection of musicians that understand each other so naturally.

The intensity of their tempo gives little chance for the quintet to relax. Something interesting is always happening throughout the rhythms, moving the melodic and harmonic code forward. One can feel frenetic precision in tunes like "Oak City" and "What is This?" in which the powerful rhythmic base sets a perfect groove for saxophonist Sjoerd Dijkhuizen and trumpet player Rik Mol to perform in perfect unison. Catchy melodies are shaped by the smart and changeable harmonic progressions of Rob Van Bavel's piano, which spreads a carpet for the horns to play fresh phrases, allowing the past to melt into the contemporary jazz language.

There is also time in this strenuous album to take a breath, like the calm that comes after a storm, but noticing a new jolt. The lonely, meaningful ballad "When We Were One" demonstrates how Ineke's beat is all about control: he gives to the music what it demands. There is nothing unjustified in this tune as he showcases a tact and finesse that complement his hard-bopper strength.

Bassist Marius Beets puts his signature on two of the album's most striking tunes, "Seven on the Richter Scale" and "Cruisin,'" in which he shows his capacity to explore oriental rhythms and a disco touch without losing the cardinal characteristics of this quintet.

The Eric Ineke Jazzxpress proves, clearly, that time has nothing to do with jazz labels. It is alive along the decades and its spirit, like Eric Ineke's, is timeless.

Oak City; Seven on the Richter Scale; The End of The Affair; Night and Day; When we were one; Just a Tune for you; What is This?; Cruisin'