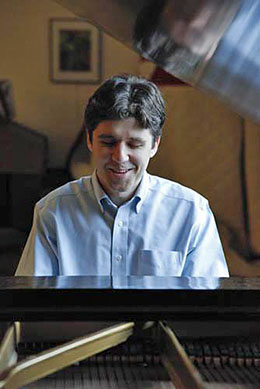 Michael McNeill has become an integral part of Buffalo, NY's thriving jazz and improvised music scene, performing with bands led by Kelly Bucheger and Ravi Padmanabha, and co-leading a quartet with John Bacon. He's also collaborated with trumpet legend Paul Smoker on projects of standards and of original compositions. McNeill also performs with and composes for the New Buffalo Jazz Octet, which the Buffalo News has called "a veritable who's who list of killer regional jazz players."

He also produces and curates the [email protected] concert series, which presents local and regional musicians in an acoustic concert setting in styles range from mainstream to the far reaches of the avant-garde.

Besides these ambitious jazz projects, McNeill is also part of Wooden Cities, which performs new classical music by local composers, in addition to improvisation-based pieces. He continues to delve into the Great American Songbook with Buffalo vocalists Mari McNeil and Becky Davis.

Teachers and/or influences?
Paul Smoker and Beverly Smoker were my primary teachers in college (jazz and classical, respectively), and remain mentors to this day. In graduate school, my teachers were George Garzone, Charlie Banacos, and Randall Hodgkinson.

My influences range far and wide. While the standard jazz heroes are very important to me (John Coltrane, Miles Davis, Duke Ellington, etc.), I have some unusual favorites, too—based on whatever happened to be in the discount bin on the day I'd go to the record store, or what people have lent me, or what live bootlegs I've downloaded. I have a soft spot for some of Terje Rypdal's '70s recordings, for Art Pepper (especially his later records), for Hampton Hawes, and for Miles Davis' 1969 band. I also listen to and play classical music, and find inspiration in old American hymns, pop music of various eras, and sounds from India, Africa, and South America. I continue to be inspired by the musicians I play with.

Your sound and approach to music:
I try to hear everything that's going on and add what the music seems to need from me. Of course, it can be hard to judge what that is, but that's the goal.

Your dream band:
I'm very stimulated by the artists I already play with, but there are certainly many that I haven't played with who I'd love to work with. Any listing would leave out some important names, but three musicians I'd love to work with are John Abercrombie, Ellery Eskelin and Billy Hart.

Favorite venue:
Paul Smoker, Phil Haynes, and I finished a tour on a dreary Tuesday night in a one-stoplight town in Pennsylvania at the Equinox Cafe (now the Elk Creek Cafe and Aleworks). I would never have guessed that the crowd that gathered there would be so attentive to and enthusiastic about our avant-garde music. I'll always remember the warm welcome they gave us on such a cold night.

Your favorite recording in your discography and why?
I'm quite proud of the music on Passageways, my first CD as a leader, with Ken Filiano and Phil Haynes. We took my compositions into unexpected territories, still staying true to the written material, and with great cohesion in the band. There are passages of tenderness and lyricism, pungent dissonance and sonic experimentation, and good-ol' up-tempo post-bop, that are all integral to the stories we're telling in our music.

The first Jazz album I bought was:
Keith Jarrett, Expectations. After my freshman year of high school, I read an article about Jarrett and his solo improvised concerts. I was blown away by the idea of totally improvised music, and of a musician who would be great enough that he could pull that off. I happened upon a copy of Expectations when I was traveling in Germany later that summer. Expectations is a group album—with Dewey Redman, Samuel T Brown, Charlie Haden, Paul Motian and Airto Moreira, plus some strings and brass—and they play on Keith's tunes (so not the heroic idea of the solo improvised concert). But I was quickly taken with the gospel/funk grooves, Redman's and Brown's gritty sounds, Keith's dexterity and imagination. I was intrigued by the free jazz passages. The sounds and feelings of that album have stayed with me ever since.

How would you describe the state of jazz today?
There are certainly some problems in the jazz scene, but I'm heartened by two things: the musicians I continue to find in my own community and around the world who have something to add to the music, and the new listeners who (perhaps having no special knowledge of or appreciation for jazz) show up at concerts and are taken in by the music.

What is in the near future?
I play on the CD, House of Relics, a pending release by Buffalo saxophonist/composer Kelly Bucheger, with special guest Bruce Johnstone, on baritone sax (it should be out in June). The group has been playing Kelly's music for a couple of years, and we're able to take it in different directions. His music is very direct and engaging—complex enough to keep it interesting, and simple enough for the band to expand on as we play. That group will be performing around Western New York this summer and further beyond in the next year.

A new project that's coming along nicely is the New Buffalo Jazz Octet, which comprises some of my favorite players in Western New York. I do a lot of the writing for that band; Kelly Bucheger and drummer John Bacon also contribute some charts. It's a very satisfying group for me; it allows for a lot of spontaneity in the improvising, and it allows me to realize many of my compositional ideas. The group has some of the punch of a big band, with the flexibility of a small group.

A subset of that group, with John Bacon, bassist Dave Arenius, and trumpeter Tim Clarke, played a few times last year and is preparing for a few more gigs this summer. John and I conceived of the band as a post-ECM group, inspired by the sounds of our many favorite musicians who've recorded for that label.

By Day:
I teach piano lessons and I'm the Music Director at the Unity Church of Buffalo.

If I weren't a jazz musician, I would be a:
Before I was hooked on music, I thought about becoming a physicist or a mathematician (I actually minored in math in college). Lately, though, I've become quite interested in food, so I might find enjoyment as a chef, baker, or brewer.