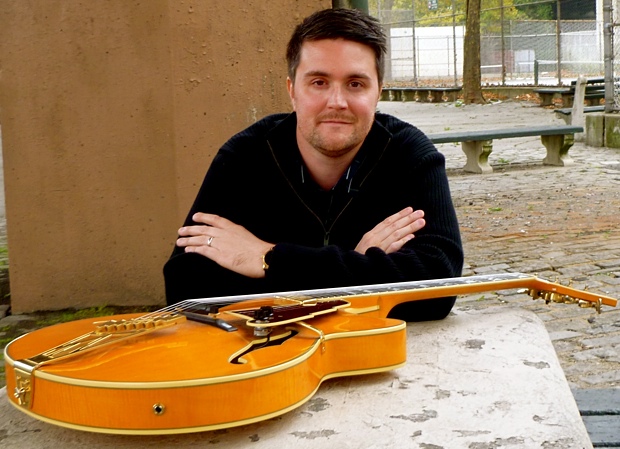 view slideshow
By Joshua Maxey
September 20, 2012
Sign in to view read count
Meet Josh Maxey:
Making a series of six albums in twelve months. Doing it without Impulse!, Blue Note, Verve, money or without playing the Village Vanguard. Eating a lot of pizza. One through five-and-a-half available: Incarnate, Approach, The Language of Sound and Spirit, Argument for the Blues, Light Cycles and Blues in the Kitchen EP.

I knew I wanted to be a musician when...
I was about 10 years old when I received my first stereo and two or three CDs as a gift. I was enraptured. I'd lie on the floor listening with a speaker at each ear. I knew immediately.

Your sound and approach to music:
Love, really.

I write a lot. We've recorded (including the live recording this Saturday Sept. 15th) eight albums since last April. I counted, that's about 70 songs written and recorded.

So, there is something to be said in volume, or outflow. I've found a seemingly endless source of music and insight. I'm grateful the music has started to get out, particularly here at All About Jazz.

My approach is to make music I believe in and find listeners where they already are (Twitter, particularly). I'm a Twitter musician.

Your teaching approach:
I teach full time and make a living doing it. I think my job is to help someone take their next step working with music, sound and the guitar.

Your favorite recording in your discography and why?
Hmmm. Yeah, I don't know. Maybe The Language. Maybe all of them, though. I love the things that Jessica Martinez Maxey plays on. Her album, All My Blessings is really nice.

The first Jazz album I bought was:
John Coltrane's A Love Supreme, Miles Davis' 1964 Concert and Rodney Jones, The X-Field.

What do you think is the most important thing you are contributing musically?
It isn't just me. If you'd like to do something, go do it.

Sometimes you have to just say, "I'm making six albums this year," and then go do it.

We are in a different day musically. You can do exactly what you've dreamed of. There are very few restrictions. The cost of making a record can be reasonable and you can certainly find an audience, you can find people who like the music you make and make meaningful connections with them.

Did you know...
I eat a lot of pizza. Ok, that's common knowledge.

CDs you are listening to now:
My albums;

Led Zeppelin, all of them;

How would you describe the state of jazz today?
I don't know. I don't follow it.

What are some of the essential requirements to keep jazz alive and growing?
Write lots of music and record it.

What is in the near future?
Gig Saturday, September 15, here in Brooklyn. We're recording seven new songs for a new live album.

What's your greatest fear when you perform?
Attack from space?

What song would you like played at your funeral?
I'd need a few on that one. Something describing my love and gratitude for dear ones.

What is your favorite song to whistle or sing in the shower?
Same as the list above!

If I weren't a jazz musician, I would be a:
Guitar teacher.

Making a series of 6 albums in 12 months.