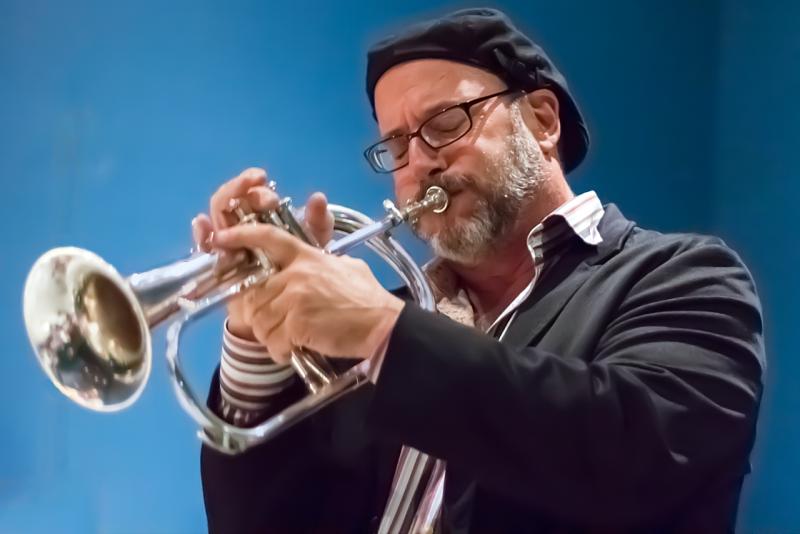 By JEFF OSTER
June 12, 2015
Sign in to view read count
About Jeff Oster:
Jeff is one of the few trumpet / flugelhorn artists working in ambient terrain. His music will take you through chilled and dramatic soundscapes, led by the silken sound of his horn. Three of his albums, Released, True, and Surrender have been voted as ZMR Album of the Year by broadcasters worldwide. His new album, Next, is now available. With Next, Jeff creates a new genre—New Age Ambient Funk—and along for the ride are guitarist Nile Rodgers (Chic, Daft Punk, David Bowie, Madonna) on the title track, and includes five songs created during an epic session with the iconic duo of drummer Bernard Purdie and bassist Chuck Rainey—musicians that he has admired and respected for his entire musical career.

Teachers and/or influences?
I started playing my horn when I was eight, and the most influential teacher I had was my high school band director—William "Uncle Willie" Ledue. I graduated from Coral Gables High in Coral Gables, FL in 1975, and at that time we were the best marching and concert band in all of Florida. We marched 200, and our concert band had over 100—and we were good! How good? This good! We went to Europe—all 200 of us, marched in the Orange Bowl half time shows, and in general, learned about deep friendships and excellence of working together in music. It inspired me and still does. Uncle Willie gave me my first paying gig—playing "Taps" at a Veteran's funeral—and I got paid $10. So cool... As I've grown, I've been inspired by Bill Chase, and Herb Alpert, and Miles Davis and Chris Botti, along with Steely Dan, Pink Floyd, Will Ackerman, Yes, U2, and today by artists such as Kendrick Lamar.

I knew I wanted to be a musician when...
I walked into the band room when I was eight yrs. old... seeing all of those shiny brass horns, and the smell of valve oil and that crushed velvet inside the cases? Too cool... Every peak moment playing with a band, where many feel like one, just deepens that joy.

Your sound and approach to music:
My playing is often described as sounding like Miles Davis meets Pink Floyd. My sound is a unique combination of my parents' influences of '30s and '40s lyrical standards and my love for progressive rock, with some jazz/funk thrown in for good measure. When I was young, and practicing my horn, my father would sing the standards I was practicing as I'd play the trumpet. I learned to play my horn as if it was singing the lyrics as my father was singing them. The phrasing, the sweet tone, the heart... that's what I am known for today. As my taste in music developed, I began to add my love of progressive and jazz/funk music into his own songs—mixing the groove and the my warm toned horn with people walking or talking, the sounds of nature, and more. I create soundscapes, and over them, my deeply rich tone can fit perfectly—like icing on a cake—like a blanket on a bed.

Your teaching approach:
I learned a long time ago to write about what you know about. I realized that everyone has a unique voice, as a musical artist. Even though I might have to cop a style for a session, or get out of my comfort zone to play a gig for someone else, I'm still ME. I sound like me, and if a student embraces who they are as a player, and follows the music and expression they love, that's the best advice I could ever give. Be YOU. There is NO ONE like you, you are unique, and follow what you love when you play and write. Do what moves you, what stirs your heart. Music is WAY too much fun to be spoiled by playing stuff you don't like. And, if you choose the studio musician path, KNOW that you WILL be playing stuff that you don't love from time to time—but, you WILL play it well when they hit record, or you'll not be back!

Your dream band:
It would be great to be in the Steely Dan horn section... It would have been great to have jammed with Miles (although there's no guarantee how that might have felt—Miles being Miles and all :) I've just completed and released a new album Next, and on it are Nile Rodgers, Chuck Rainey, and Bernard Purdie. Let's take THAT rhythm section on the road!!!

Road story: Your best or worst experience:
Best: Sitting five feet from Ray Charles as he sat at the piano at rehearsal, putting the Raelettes through their paces.

Worst: Driving all night to Las Vegas from Los Angeles—five band members and all the equipment, playing the audition, then turning around and driving back to LA because the leader didn't want to pay for a hotel.

Best: Walking down Bourbon Street at midnight, playing my horn, being invited in to play with three different bands before I hit the end of the street.

Worst: Playing "Proud Mary" to five drunks with their backs to the band at 1:15am on a Tuesday night in the San Fernando Valley.

Best: Hearing one of my songs on the radio for the very first time...

Favorite venue
I had a chance to play at the Wildhorse Saloon in Nashville, at the JPF Music Awards. The best sound, lights and a great staff. I played with Michael Manring that night, and it was just magic.

I've also had a chance to play at Yoshi's a few times here in Oakland, CA. The sound there is great, and the history of that place is just wonderful—SO many great artists have played there, and it's always nice to be a part of that!

And, we've played a few times at the Fujitsu Planetarium in Cupertino. THAT is just SO inspiring, playing live to a star show, the planets moving across the "sky," playing live improv as things shift from above... just amazing.

Your favorite recording in your discography and why?
That's like asking me which child of mine is my favorite. There are several—All four that I have co-written and performed with guitarist Will Ackerman—my "dream come true" series of recordings —At Last, Released, On One Knee, And We Dance ...they are simple, pure and beautiful, and represent the truth that if you dream big, that sometimes they come true.

Saturn Calling—from my album True—mixed by Bruce Swedien (Michael Jackson's Thriller and sooo many more), featured on the NASA website, for the sample of the Cassini Saturn spacecraft transmission I included in the song.

2Di4—for the smoky trumpet performance, one of the best I've put on a record

What do you think is the most important thing you are contributing musically?
I am creating music that shows the flugelhorn and trumpet in a light not usually seen. It's about tone, and loops and beats, it's about expression in a way not normally associated with the instruments.

I have a unique sound, one that I have embraced fully as I've grown as an artist. It's about a sweet tone, about the expression of my deepest feelings through my instrument. There's only one Jeff Oster, and the greatest compliment I can imagine is when someone hears the first few notes of my playing, and they know that it's me.

Did you know...
That the first song I ever had a publishing contract for was a country song signed by Mel Tillis to his publishing company.

And, I did stand up comedy for several years in Los Angeles, and have been on America's Funniest People with one of my comedy routines. Watch here

The first jazz album I bought was:
Here's a surprise—Kind of Blue!

How would you describe the state of jazz today?
Jazz today is full of adventure. There are players that embrace the traditions of the past, while others work to expand it in creative and interesting ways. There are all kinds of jazz, and to discover the ways in which it can be embraced and built upon is one of the great joys in my life.

What are some of the essential requirements to keep jazz alive and growing?
The youth of today has to be exposed to the rich history of jazz. There are giants who have played this music, and what they have shared with us cannot be lost. Whether it be in schools, or in film, records, and the press, it is essential that new generations are shared this musical history.

What is in the near future?
I am deeply involved in the release of my new album Next. Today, as an independent artist, there are SO many things to do to support the release of a new record... social networks, airplay, touring, interviews, web design, blogging, live show video editing, So many things to be done.

I enjoy the multiple levels of creativity needed to bring an album like Next into the world. And, it starts with the music, and I am VERY proud of the music on this new album.

What is your greatest fear when you perform?
Not being able to fully express through my horn what I hear and feel inside...

What song would you like played at your funeral?
"The Opening of Doors" by Will Ackerman.

What is your favorite song to whistle or sing in the shower?
I'm a terrible singer, and can't whistle much either. But if I tried to, it would be a big band swing version of Led Zeppelin's "Black Dog."

By Day (if you have a day job):
Financial Advisor.

If I weren't a jazz musician, I would be a:
Very unhappy...

What is the future of music?
As much as we hear about the decline in sales, the rise in low paying streaming services, and the downfall of the music business—there is so much new music being made and heard. It will ALWAYS be a state of flux, but one thing remains constant: Musicians make music because they MUST.

We have no choice. It's a gift of expression, and a gift of love, and for me and so many others, there's no choice in the matter at all.

We MUST play, and we WILL.