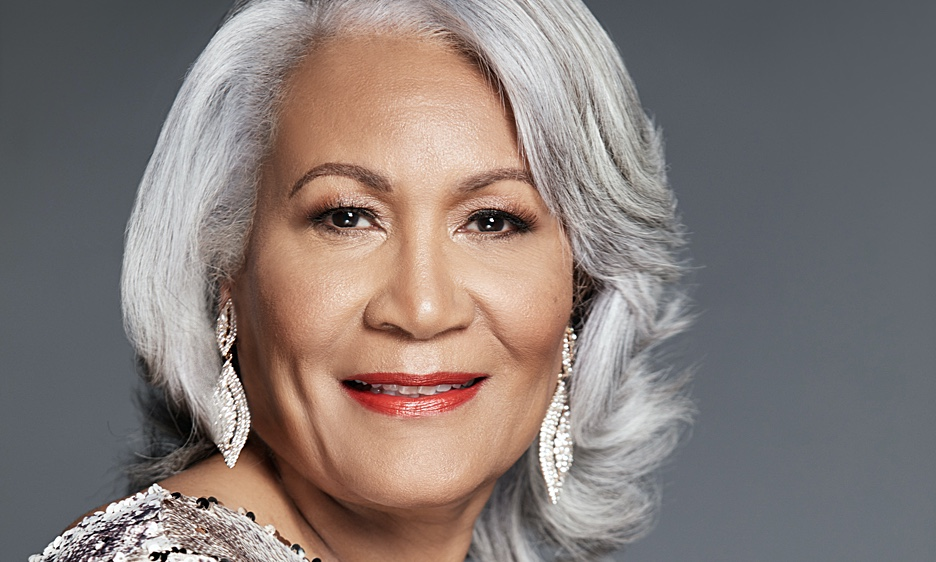 BY HAZEL MITCHELL-BELL
March 30, 2020
Sign in to view read count

Vocalist Hazel Mitchell-Bell has become one of Washington, D.C.'s first ladies of jazz. With highly praised first album, Stronger than Ever, under her belt, and another album set for release in 2020, she appears on festival, concert and club stages, enjoying one sellout after another. Working closely with pianist and music director, Vince Evans, she performs in a big band and smaller ensembles, stoking the fires of the D.C. jazz scene.

Born in Fayetteville, North Carolina to Ernest and Roberta Mitchell, she moved to Washington, D.C. as a toddler and she knows the nation's capital like the back of her hand. Music has been part of her life since elementary school, continuing through high school glee clubs, performances, talent shows and participation in the Mount Carmel Baptist Church youth choir.

The singer's life has taken many turns. There were decades in which the needs of family and a compelling nine to five position took first place, but when the time was ripe (as it surely is now), her music took front and center position. Today her listening audience is growing by leaps and bounds.

Mitchell-Bell comes from a musical family. Her mother was a professional singer from North Carolina who sang gospel as well as jazz and R&B. One sister had her own band and a younger brother and sister appeared on "Showtime at the Apollo." It is only natural that she shares their singing ability.

She was educated in Washington, D.C. Public Schools. Courses at the University of Maryland and the USDA Graduate School advanced her career in the Federal Government. She received numerous awards in her 38 years working at the U.S. Department of Agriculture and the Labor Department. She has also been a professional model, appearing in fashion shows and major magazines, and when she retired as a program analyst from the Federal Government, she had the resources to pursue a full-time career in music.

In 2016 she was introduced to pianist Vince Evans and has worked with him ever since. In 2018, their collaboration resulted in her debut CD Stronger Than Ever, which includes standards from the Great American Songbook and R&B hits. The album title resulted from the passing of her daughter in 2009 and of her husband in 2011. The singer was left to raise "a wonderful 11year old granddaughter." When her granddaughter left for college, Hazel Mitchell-Bell was left with an empty nest and the time needed to rekindle her passion for music—and she hit the ground running.

She was soon performing in the District's top jazz clubs and as well as the Kennedy Center, the Preservation Jazz Festival, the Mid-Atlantic Jazz Festival and the Sheldon Cultural Center in St. Louis. With a 17-piece orchestra, she has performed to standing room only audiences at City Winery in Washington, D.C. and received a standing ovation from the seasoned and discerning jazz fans known to frequent the popular Westminster Jazz Night series.

I had no mentors when I started singing although I have worked with several vocal coaches over the years. However, I was introduced to pianist Vince Evans in 2016 and have worked with him ever since. As a mentor, vocal coach, arranger and my music director, he has helped me to fine tune my skills as a vocalist. My influences have been Nancy Wilson, Sarah Vaughan, Ella Fitzgerald, Dinah Washington, Nina Simone, Natalie Cole and Phyllis Hyman, to name a few. I admired the great orchestral arrangements and elegance I heard and saw with many of those icons, and try to bring that to my own performances.

I knew I wanted to be a vocalist when I was a little girl watching "The Ed Sullivan Show" and Dick Clark's "American Bandstand." I also dreamed of singing when I attended performances at The Howard Theatre in the District and Apollo Theater in New York City. As a child, I always sang because I was surrounded by music (i.e., my mom singing in the house or in church). Music is my happy place. No matter what is occurring around me, I frequently find myself humming or singing a song.

I really don't have a specific approach when it comes to music. I listen to a song, work through the song with my vocal coach, then practice, practice and practice until I learn the lyrics and add my style to it. I listen to various artists and choose songs that fill my spirit. I also have the wonderful pleasure of working with a phenomenal music director and producer in selecting music that fits my vocals. However, I have been told that my style and sound are similar to those of Nancy Wilson and Sarah Vaughan.

I am not a teacher. I am a student continuing to learn something about my craft every day. If I were a teacher, I would recommend that anyone who desires to pursue music as a career ensure his/her future for old age by having a retirement plan in place. Looking at earlier musicians and vocalists, I've seen that a large number of them were actually destitute when they reached their senior years, struggling to make ends meet because music was the only profession they knew. Even in failing health, they sometimes had to perform to survive.

My dream band consists of the current musicians that accompany me. They are pianist and music director Vince Evans, bassist James B. King, drummer J.C. Jefferson, guitarist Dave Manley, saxophonist Craig Alston, and trumpeter Kenny Rittenhouse. I could not think of performing without this extraordinary group of musicians. They've been with me from my first CD and through all of my performances and they'll be with me on my upcoming album.

I have no road stories to tell. Ask me again when I start touring! My worst experience performing so far was a packed house when I realized the strings section did not have their charts for the introduction to "Skylark."

My favorite venue is the City Winery in Washington, D.C. because the acoustics are excellent, and the establishment accommodates the staging for my performances. Management takes good care of the performing artists. The venue provides food and drink to the band, accommodating everyone's food preferences. It's great for the audience as well because the food and wine choices offer something for everyone. When I perform there, the venue is able to accommodate our 17-piece orchestra and background singers. It's a terrific spot! The establishment selects a wine from its private stock that is dedicated to each headliner and they put his or her picture on the wine bottle. The proceeds from the sale of the wine are donated to a charity of one's choosing.

Stronger Than Ever was my first recording and it is really hard to say what my favorite tune is because I love all of the songs. The one selection that stands out most for me is "Skylark," because the string introduction is absolutely beautiful.

Probably, the most important thing that I am contributing musically is bringing back the classic beauty of using live orchestration/musicians on my recordings and not using Sibelius (electronic instruments). I dislike drum machines. I think music has gotten lost with the use of electronics in place of having live musicians on recordings.

My favorite form of entertainment is going to different venues and watching the performances of my peers to learn and improve my own performances and the D.C. jazz community is a very supportive network. I enjoy being part of that.

The first Jazz album I brought was Nancy Wilson and Cannonball because I loved "Save Your Love for Me," the style of her vocals and the elegance.

Jazz is in a resurgence since there are more young musicians who are being introduced to Jazz through music programs in school and jazz camps. There are venues in my own metropolitan area that sponsor youth jazz orchestras such as Blue's Alley, Bethesda Blues and Jazz, Alice's Jazz and Cultural Society, the D.C. Jazz Festival and the Mid-Atlantic Jazz Festival. They are helping to keep jazz alive. There are also some stellar well-known musicians teaching in the Washington, D.C., Maryland and Virginia area (we call it the DMV). The musicians showcase the amazing talents of the youth and these young artists are learning invaluable information about this art form and the history. I believe the future of jazz is in great hands!

One essential requirement is to have experienced jazz players going to the schools and introducing kids to this form of music. Sometimes when a child is exposed to music being played by professional musicians, the experience gives him/her a spark which shows it is possible for the kid to do the same thing. . There is the distinct possibility that the kid is not hearing jazz at home. Exposure to new forms of music at school can spark their interest. Artists can become mentors with hands on workshops, working with students who show an interest.

I am currently working on my new album and looking forward to unveiling much of the music. We will reschedule our March 29, 2020 show at City Winery in Washington, D.C. The concert was to feature yours truly with the Vince Evans Orchestra and the Lomax Sister singing background. Along with numerous concerts around the world, it was cancelled due to public health concerns. Stay tuned for upcoming concert dates!

My greatest fear is having a brain freeze and forgetting my lyrics on stage.

I would like "Godspeed" by the Lomax Sisters played at my funeral.

My favorite song to sing in the shower is "Let There Be Love."

I've had three chapters in my life: Chapter 1 -Working for the Federal Government. Chapter 2 -Modeling Professionally and Retiring from the Federal Government and Chapter 3—Modeling and becoming a Recording Artist and Vocalist. What a wonderful life I am living, exploring all that life has to offer. My day job now is learning new music, honing my musical/vocal skills and keeping fit.

Michelle Obama: As First Lady she handled the pressure of being in the White House with so much grace and humility. I would love to discuss with her how she managed to deal with the media and all the scrutiny that she was under.

Preparing for the release of my new album and performing in the U.S. and internationally.