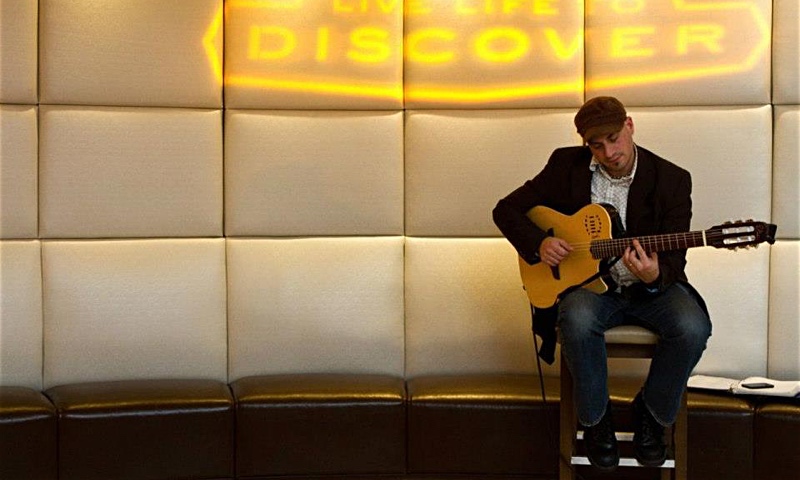 By B.D. Lenz
June 8, 2016
Sign in to view read count
About B.D. Lenz:
Mix the sophistication of jazz, the grit of blues, and the grooves of funk and soul, and you have the recipe for contempo-jazz guitarist B.D. Lenz. The New Jersey native has played guitar since his early teens, is a graduate of Musicians Institute in Los Angeles, and has studied with such masters as Mike Stern, Vic Juris, and Charlie Banacos along the way. Lenz has released 9 highly-acclaimed recordings as a leader featuring greats such as Randy Brecker, Will Lee, Joel Rosenblatt, & Mark Egan and his music has been featured in hundreds of TV shows globally including Breaking Bad (AMC), Catfish (MTV), and Anthony Bourdain's No Reservations (Travel Channel) to name a few. This Godin-endorsed guitarist has performed thousands of shows internationally, keeping the audience on their feet whether playing jazz, fusion, or jam.

Instrument(s):
Electric and acoutic guitars. I'm endorsed by Godin guitars and love their instruments. I'm also a big Fender guy and my Strat is definitely one of my fav's.

Teachers and/or influences?
I've been fortunate to study with some greats including Charlie Banacos, Vic Juris, Walt Bibinger, and even a couple lessons with Mike Stern. My earliest guitar influences would be rock/Blues players like Stevie Ray Vaughan, Joe Satriani, Jimi Hendrix, and Alex Lifeson but as I became more schooled and educated in jazz I became much more interested in the likes of Pat Metheny, Mike Stern, and John Scofield who remain my biggest influences to date. Because my tastes in music are SO eclectic, my writing and playing style definitely reflect this variety.

I knew I wanted to be a musician when...
...I literally couldn't put the guitar down. When I began playing in High School everything else (sports!) went completely out the window. I would play ALL the time and would even fall asleep with it in my hands. It didn't seem that I "wanted" to be a musician but that I "HAD" to be one.

Your sound and approach to music:
Being a jazz musician requires a technical facility and musical knowledge that's at a very high level. While I'm always working on my chops and learning new concepts, I strive more to make music that's beyond just making chord changes or reharmonizations. I want to make music that moves people at a deeper level. Technique, in and of itself, only connects with people at an intellectual level but, combined with highly thoughtful composition and production, it can reach others in all aspects of their humanity (intellectual, emotional, & spiritual) as the best music always does.

Your teaching approach:
In teaching others I believe it's important to balance a student's individual needs with the instructor's responsibility to help fill in ability gaps. It's important to be sensitive to what each student wants to learn and play while tempering that with providing a thorough musical foundation. Music is a creative endeavor and that creativity and passion ought not to be stamped out by an instructor who has their own agenda unless a student is specifically seeking out that agenda. A true educator will aid a student in pursuing their own journey and finding their own unique voice.

Your dream band:
While there are a ton of musicians I admire and would love to play with I'm just as inspired by the musicians around me that I frequently play with. Of course I'd be thrilled with the opportunity to play with any of my musical heroes but I'd be just as happy to find greater opportunities with my own circle of musician friends.

Road story: Your best or worst experience:
Well there was that time a guy got kicked out of a club we were playing later to be tazed by the cops....

Your favorite recording in your discography and why?
My favorite recording of my own happens to be my latest, Manifesto. While one USUALLY (hopefully) likes their latest effort the most, this one is surely my best work. It's entitled Manifesto for the simple reason that it most accurately reflects the ideals of what I love in music and what I'm trying to communicate through my work. I believe it to be my finest artistic statement to date.

The first Jazz album I bought was:
Mike Stern Time in Place—although it's more of a fusion record it was my introduction to any kind of jazz and is still one of my favorite records to this day.

What do you think is the most important thing you are contributing musically?
I don't believe my music to be trailblazing but I DO think it offers a unique perspective and an interesting continuation in the lineage carved out by the giants of contemporary jazz & fusion. I don't believe in limiting my music to stay within the boundaries of a genre so I'm blending all that I love from the past with the sounds & grooves of today.

Did you know...
While I was a music student in L.A. I made extra money as an extra in TV and film. I was in Pretty Woman (I think I got edited out), a stand-in for the "New Kids on the Block" Coke commercial, and in a couple Twix candy commercials

How would you describe the state of jazz today?
Jazz is, without any doubt, facing many of the issues that the industry as a whole is dealing with; piracy, declining record sales, low streaming royalty rates. And it's audience doesn't appear to be growing very much. BUT, that audience is fervent in its support and will never completely go away. It's up to musicians and programmers to keep jazz relevant in this quickly changing world and I'm sometimes disappointed by gatekeepers who wish to preserve jazz to a very specific era that has been very well trodden. I fully agree that we need to respect and mind the tradition but we also need to keep it vital with new perspectives in order to keep jazz as it should be, a work in progress.

What is in the near future?
My trio is embarking on a month long tour this Summer which will include 3 weeks overseas. Upon return I have a SUPER busy schedule as well. Later this fall I will be releasing my 10th recording, a live date entitled "Live in the UK!" Stay tuned!!

What song would you like played at your funeral?
"People Get Ready" by Curtis Mayfield