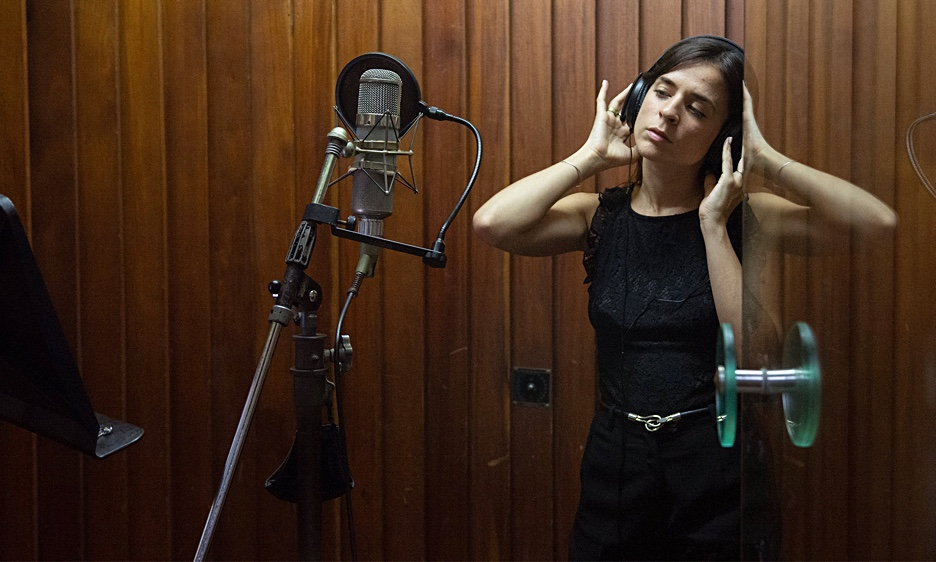 Anita Donndorff is a 26 year-old Argentinean singer. She began her musical journey in 2017, and has become one of the most influential singers in the jazz scene in Buenos Aires. She has performed at some of the most important music venues in Argentina, such as Teatro San Martin, Virasoro Bar, Bebop Club, among others. Anita has also shared the stage with the most important and prestigious musicians of the scene such as Juan Cruz de Urquiza, Hernán Jacinto, Oscar Giunta, among others. She has been an artist in residence at the prestigious Jazz Club Thelonious, having played dozens of shows in the last few years. She has released one album as a solo artist (You Invade All My Dreams, 2021) and three singles ("Tus Ojos," 2021; "Lo Que Me Queda Por Vivir," 2021; and "Herida de Sombras," 2022). She's now preparing the release of her next album, Thirsty Soul, featuring some of Argentina's finest musicians, and arrangements and double bass performances by New York mainstay Paul Sikivie.

I studied at the EMC (School of Contemporary Music) in Buenos Aires, Argentina, where I had the opportunity to learn about and explore various musical genres, after which I decided to focus on jazz.

There I was part of an ensemble in which we studied and played the album Kind of Blue. That experience changed everything for me. I understood the voice as an instrument, that it does not need a story to narrate, that the sound and intensity is like in any other instrument, that improvisation takes place in that musical present in which one has to be attentive and connected with everything that happens to be able to create something authentic. All of that was new to me, and it was a lot! It became clear to me that I vibrated there and it was the path I wanted to follow.

After finishing the EMC I continued studying privately. I took vocal technique classes for several years with the singer Marcela Chavez. Then with the trumpeter Juan Cruz de Urquiza I trained in improvisation, trumpet, and ear training; he was my mentor for several years.

Then I was able to take classes with the Portuguese singer, María João, who opened new doors for me and showed me new paths when it comes to vocal improvisation and music in general.

I've always known it. I've sung since I can remember. It was always my favorite activity along with the time I spend and share with animals. All my studies have been focused around these two passions.

I place a lot of importance in the technique, projection and clarity of the voice. You have to work to get to that, but for me there is no such thing as a good sound. My grandfather was an opera singer and he always taught me about projection and the importance of good technique. The knowledge and understanding he shared with me has resonated in me ever since.

Having something to say is definitely the main thing for me. If there isn't a reason, a sound, a story, or something that moves me to sing, I'd rather not. Transmit something, which will be different for each listener; resonate and reach that first within myself because only from there can I reach others. As long as it moves me I can move others, and reaching someone is worth it: that's what art is about, I think.

I think that every moment and every project inspires me to assemble a different group of musicians. My ideal band is the one with whom I can play what I want at that moment. So far I've been lucky enough to work with the ones I wanted to work with. It was something I put a lot of effort into. I need certain artists to get the sound I'm looking for and I take the time to find them. I've been very insistent to get to some of them, musicians that I admire and from whom I always have a lot to learn. I feel very grateful for that.

But I can say that I would have loved, like a dream, to have been able to sing with Kenny Burrell, Dexter Gordon and Scott LaFaro.

My favorite place to play is Virasoro Bar, in Buenos Aires, Argentina. It is a small and warm place, and the acoustics are perfect for a jazz club. The staff make you feel at home, which creates a great feeling between the musicians and the spectators. It's ideal for a small jazz group format, although I have put together projects with up to eight musicians on stage.

I was lucky enough to play many times and present different projects at the bar.

I like many musical genres, different from each other. One of my favorite artists as a girl was Jimi Hendrix, I also listened to the Argentine group Los Redondos de Ricota. At the same time I already loved Miles Davis and Louis Armstrong, but it took me a long time to start listening to jazz singers. I'd say it wasn't that many years ago that I started.

The first jazz album I bought was GO by Dexter Gordon. I bought the vinyl at a record store in NY on a very short trip I took with my dad. They had given me a turntable a few years before and on that trip I bought my first records.

I think there are incredible musicians. I like to see so many young people playing so well and with such enthusiasm, and still being able to listen to some legends that are still alive and from whom we can learn a lot. There are really many wonderful musicians. Although sometimes I feel that, although the level is high, something does not always happen, that is, they do not always move me. Often I hear good musicians and feel that they don't have a clear musical commitment or that they lack a bit of enthusiasm or strength when it comes to expressing themselves.

I think the key is to find a balance. In the tradition, continue studying and learning from the pioneers and legends who gave us so much and who started this music; not lose freshness and dare to continue searching (as they all did), reach new horizons and be able to express our present with courage. The jazz that we hear on records is a reflection of what was happening at the time and the way musicians had to express themselves, they created a way, a style with which to express what they had to say. Although we continue to learn from them and study from that music, we need to be able to say and express our reality and talk about what happens to us today, not let what they left wither, and take it to a new place, so that the cliché does not win. I would hope that in 100 years those who listen to our records can say that we played and recorded in this century and that the things that happened at that time touched us and our music.

I'm about to show a new album. It's fresh out of the oven and I really want to share it. It is a project that I put together and recorded in Argentina with the help of Paul Sikivie, who is an arranger and producer, in addition to playing the double bass. The musicians that participate are all Argentinean and I feel very happy and grateful to have shared music with them and that they are part of this project, they are all incredible artists, from whom I learn and admire a lot.

In general, I'm not afraid when I go on stage. The other part is difficult for me: I'm quite shy and I don't like to talk much, the role of talking to the audience is challenging for me. Once I start singing I feel comfortable and happy, fears disappear, but I always get a little nervous before going up. It's like an adrenaline rush that is partly beautiful too.

I don't have a particular song, but I would like music with drums to play. Actually, I would love for there to be live musicians playing and sharing with the people there. I think you have to try to celebrate the life that the person had when they go to another plane. Nothing better to celebrate and cry than music.

There's a song I used to sing in the shower when I was a kid. I even came to believe that I had composed it. My mom told me that when I was little, I called her to the bathroom to show her the song I had invented and she didn't know how to tell me that the song already existed haha. I still sing it when I remember: "Heart of the Cuban" by Silvio Rodríguez.

I would work with animals, without a doubt. Animals and music have always been my two passions. I think I need both and I couldn't be happy without them.

I've never worked with animals until now but I've always been close, collaborating in rescue groups for abused animals.

I love Cortázar, his writing moves me and his career and history attract me a lot.