Take Five: The Public and Private Lives of Paul Desmond

Even when Desmond was seriously ill with cancer, he made one final appearance with Brubeck in early 1977, a dedicated musician and friend to the very end. 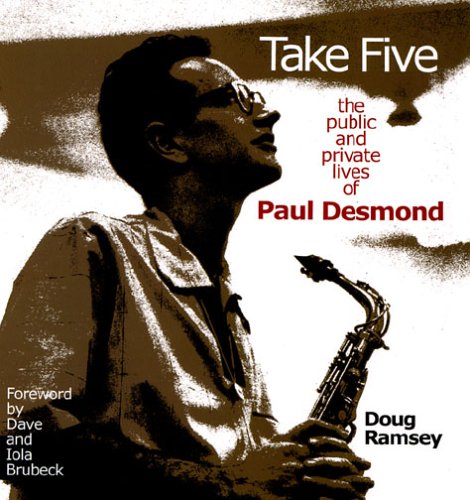 Paul Desmond was an integral part of the Dave Brubeck Quartet for seventeen years and a brilliant lyrical alto saxophonist who sought a personal sound on his instrument, one of a few emerging saxophonists in the early 1950s who chose not to copy the furious bop licks of Charlie Parker. He was also the composer of the hit song "Take Five," though he never succeeded in writing another bestseller. But Doug Ramsey explores every facet of Desmond's public and private lives in this intimate, often hilarious and very thorough biography, a book that is very hard to put down. Even though Ramsey had the advantages of being both a musician and a good friend of Desmond, he still had his work cut out for him, as the alto saxophonist led a very compartmentalized life and was not one to open up completely to anyone who knew him. As Ramsey remarks, many of Desmond's friends were surprised to discover people they knew at his memorial service, not knowing the wide circle that of folks the late musician knew.

Born Paul Breitenfeld, he frequently claimed that he chose the surname Desmond out of a phone book, though that wasn't really the case. Desmond played clarinet early in his career, though he only recorded on the instrument for an early 1950s 78 rpm record with Jack Sheedy. He also played a bit of tenor sax in at least one band, though no recordings are known to exist. He played piano (his one attempt to play a club date was unsuccessful) and was proud of the Baldwin grand piano that occupied his apartment for a long time; he willed it to Bradley's, one of his favorite Manhattan jazz clubs. No mention is made of Desmond's one-shot appearance on bass marimba (on the song "Upstage Rumba") during the making of Jazz Impressions of New York, but it was a novelty and he stuck to playing a vamp, in any case.

Ramsey conducted painstaking research in order to produce this detailed biography, which was published in a large coffee table book format with numerous photos, reproduced letters and illustrations, including transcriptions and analysis of Desmond's solos by prominent jazz musicians. Ramsey's subjects readily open up to him, including members of Desmond's family, fellow musicians, a number of the late musician's lady friends and his ex-wife Duane Desmond Kaye, who was all but unknown to most of his acquaintances. One artist even explained that Desmond was amused at her ability to play his piano nude for hours at a time. Family and friends loaned little known photographs of Desmond and others likely came from the band's archives. Of particular interest is a picture of Desmond and bassist Bull Ruther blowing up air mattresses to spend a night in the quartet's car while on the road in the early 1950s, when gigs didn't pay enough to afford hotel rooms. There are numerous unpublished letters (both to and from Desmond) and notes to himself (many of which are reproduced in this book), some of which might have been destined for his never-finished memoir How Many of There Are You in the Quartet? Desmond's sidesplitting article for the English humor magazine Punch (about an ill-fated booking at a county fair) and several examples of his witty liner notes demonstrate his gift as a writer, a talent which was underutilized every bit as much as his ability as a composer.

There is something for everyone within the pages of Ramsey's masterful portrait. Ramsey avoids the use of psychobabble to explain Desmond's relationship with his mentally disturbed mother, his reluctance to make long term commitments to any of the women in his life, or his experimentation with drugs. Instead one comes to accept them as part of his extremely complex character. His working relationship with Brubeck was unusual. Though Desmond actually attempted to compete with him early on, robbing the pianist of paying gigs to serve as a leader himself, he knew in his heart that Brubeck's accompaniment inspired him to his greatest heights (a feeling that the pianist reciprocated). Desmond even suggested Joe Morello's hiring, though once he came on board, the alto saxophonist threw some temper tantrums about his approach to playing. But the unusual musical ESP shared between Desmond and Brubeck made them ideal bandmates, often exchanging stories though songs quoted in the context of their solos and engaging in brilliant improvised counterpoint. Desmond eventually became the highest paid sideman of his era, though he refused to sign contracts, inherently trusting the pianist to reward him financially.

After the quartet disbanded at the end of 1967, Desmond and Brubeck remained in touch, playing occasional dates, touring Europe in 1972 (with Gerry Mulligan making it a quintet) and the U.S. in 1976 (a reunion of the classic quartet with Joe Morello and Eugene Wright). Even when Desmond was seriously ill with cancer, he made one final appearance with Brubeck in early 1977, a dedicated musician and friend to the very end.

Ideally, Desmond's recordings should be required listening as one reads this massive volume. Ramsey discusses a number of the sessions in sufficient detail without going overboard, exploring both his numerous dates with Brubeck and his impressive, but far too infrequent sessions as a leader. What is interesting about Desmond's recordings under his own name is that most of them omit a piano. Initially this was done to differentiate them from the sound of the Brubeck Quartet, but he found such strong support from guitarist Jim Hall and later, Ed Bickert, that a piano was no longer a necessity. Likewise, his two official studio meeting with baritone saxophonist Gerry Mulligan were pianoless dates, though both would join Brubeck for a successful tour of Europe in 1972. Paul Caulfield documents the vast majority of Desmond's known recordings in an extensive discography that covers his work as a leader and sideman, even including a number of bootlegs, though he was not able to correct the mislabeled songs on some of them, due to not having copies available to audition.

Doug Ramsey has set the standard for jazz biography with this comprehensive volume. Every jazz fan seeking to learn more about this complicated but memorable musician will be delighted with Ramsey's remarkable portrait of his good friend, who is greatly missed.