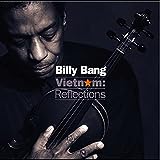 With his previous record, Vietnam: The Aftermath, violinist, veteran, and anti-war activist Billy Bang exorcized some of the demons that continued to haunt him for thirty years following his return from a tour of duty in Vietnam in the '60s. With Vietnam: Reflections, an album that blends traditional Vietnamese folk melodies with modal grooves and tender ballads, he moves further towards reconciliation. It doesn't exactly shake any musical foundations, but that's not the point of this deeply personal project that finds Bang surrounded by a number of other Vietnam veterans—trumpeter Ted Daniels, drummer Michael Carvin, percussionist Ron Brown, and conductor Butch Morris—in addition to pianist John Hicks, saxophonist/flautist James Spaulding, multi-instrumentalist Henry Threadgill (this time heard solely on flute), and bassist Curtis Lundy.

The inclusion of singer Co Boi Nguyen and Nhan Thanh Ngo on dan tranh, a sixteen-string zither, finds Bang moving towards a point that, despite experiences that have inexorably altered the lives of Americans and Vietnamese alike, also looks to moving on and finding nexus points between two very different cultures. Bang's own compositions are informed with a significant shade of blue and fashion their melodies after Oriental pentatonics in the same way that Coltrane integrated Indian harmonies in his music. And by interspersing them with traditional Vietnamese songs, Bang creates a moving work that, even with its sometimes melancholic nature, is ultimately filled with hope and healing.

Even the structure of the album is pointed towards resolution and a joining of cultures. "Reflections starts with a modal vamp that gets moving in a relaxed way, with Bang's oriental-informed theme not entering until nearly the two-minute mark. This piece, like the third track, the equally groove-based and modal "Lock & Load, is more about creating a simple, open-ended context for the soloists, rather than any developed compositional concerns. But the interspersing of the traditional pieces "Ru Con and "Ly Ngua O —performed by Nguyen, Ngo, and Bang—after "Reflections and "Lock & Load, respectively, paints a picture of cultural division, at least at first.

But then the haunting ballad "Doi Moi paves the way for the first of two takes on "Reconciliation 1, where the American and Vietnamese musicians finally join together and, for the rest of the nearly seventy-minute record, even when the musicians go their own separate ways—as they do on the beautiful "Waltz of the Water Puppets and the traditional "Trong Com —the precedent has been set, so that by the time of the album's closer, a more upbeat reading of "Reconciliation 2, the mood has become considerably brighter.

While Bang first got his credentials in more avant-garde and free jazz settings, his most recent work has moved closer to the centre, sounding more mainstream and certainly more approachable. Still, despite the more straight-ahead direction of Vietnam: Reflections, there's no sense of pandering. Instead it's all about finding common ground and the potential for beauty in the simplest of contexts.