By Mark Sullivan
February 17, 2021
Sign in to view read count 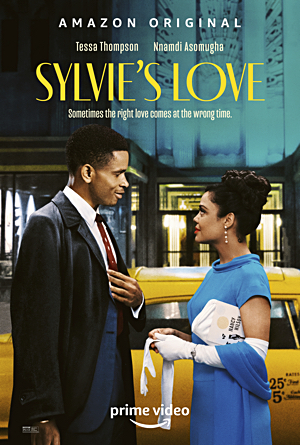 Sylvie's Love represents the new paradigm of film production. Produced by traditional film producers, and originally presented at the Sundance Film Festival, the film's main distribution has been online via Amazon's online video streaming service. It tells the story of star-crossed lovers Sylvie Parker (played by Tessa Thompson) and Robert Halloway (played by Nnamdi Asomugha). Sylvie and Robert first met during the summer of 1957 at the Harlem record store owned by Sylvie's father. Robert comes in looking for Thelonious Monk's new album Brilliant Corners—which was indeed released on Riverside Records that year, the first of many accurate period details.

Sylvie is an aspiring TV director, and Robert is an aspiring jazz saxophonist. After Robert starts working at the record shop they find a lot in common, especially music. And Sylvie is drawn to him, despite the fact that she is engaged to a man serving in Korea in the military. Robert's band is taken under the wing of the Countess, a jazz patron and manager clearly modeled on the Baroness Pannonica de Koenigswarter (aka Nica, the bebop patron in whose apartment saxophonist Charlie Parker died). Their romance is accompanied by a rich contemporary soundtrack, including songs both familiar and lesser known, like "Fools Fall In Love" by The Drifters, "She Is My Dream" by The Tads and Sam Cooke's "You Send Me." Sylvie discovers she is pregnant, but instead of telling Robert she lets him go off to Paris with the rest of the band.

Cut to five years later (Summer, 1962). Robert finishes a recording session and walks by Town Hall, where he bumps into Sylvie—repeating the scene that had opened the movie. She invites him to join her, as the jazz concert is about to start, and her girlfriend has not shown up. And so it begins anew... remember, star-crossed lovers. Sylvie's marriage is rocky, so it is emotionally believable that she would be open to reconnecting. Robert never seems to have any strong emotional ties to any other women, conveniently enough. But his professional life quickly gets upended. He leaves his band—relying upon the manager's earlier encouragement to let him know when he is ready to become a leader—only to be told that "jazz is dead."

An old Detroit friend promises an in at Motown Records, but when Robert goes to Detroit his friend admits that he was just bragging. He's really a minor assistant at the label, with no influence on hiring decisions. This sends the saxophonist into a tailspin. He tells Sylvie that he has no interest in being a family man (despite having gotten close to his son), and returns to Detroit alone, finding work in an automobile manufacturing factory. Robert's emotional meltdown is the most inexplicable act in the movie. It feels unearned, coming out of the blue to supply a final crisis for the couple to overcome. But overcome it they do, because Sylvie reaches out after hearing what Robert has really been doing in Detroit. All's well that ends well, as any romance film must.

The romance may be melodramatic, but it stays focused on the view from the Black community throughout, which is a rare thing (the recent film Ma Rainey's Black Bottom has the same sense of authenticity). This is a Black story told from a Black perspective, with only a few white characters in incidental roles. As mentioned previously, in a film with jazz music as a major theme it was important to get the details right—otherwise jazz fans would lose their suspension of disbelief. The filmmakers were accurate most of the time, but there were some small slips. During the 1957 scenes two prominent background songs were not released until 1958: "Tears On My Pillow" by Little Anthony and the Imperials, and Jackie Wilson's "To Be Loved." In the 1962 scenes Doris Day's version of "Fly Me To The Moon" is heard, which she did not record until 1965.

Compared to most period movies these are small chronological mistakes. But the "jazz is dead" career crisis seems premature for 1962. Motown was making hits, and the charts also had albums by folk acts like Joan Baez and Peter, Paul and Mary; pop/rock like Chubby Checker and Chuck Berry; and older pop like Frank Sinatra and Tony Bennett. Certainly hit jazz singles were rare; they were uncommon even in 1959 when the Dave Brubeck Quartet's "Take Five" was a surprise hit. But this is years before the market dominance of rock and roll encouraged more and more jazz musicians to try their hand at jazz/rock fusion. It must be said that the emotional turmoil caused by Robert's abruptly narrowing career possibilities does feel authentic, just a good five years early.

In the end, Sylvie's Love is a period romance that beautifully captures two time periods in New York City, with a special focus on jazz performance. For jazz fans of a certain age an enjoyable time is almost guaranteed. But the film has charms that go beyond that, especially the powerful chemistry between the two leads.