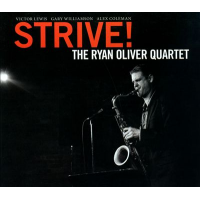 When Toronto-based tenor saxophonist Ryan Oliver was living in New York and studying at Rutgers University's Mason Gross School of The Arts in New Jersey, he struck up a musical relationship with one of the teachers at that institution—drummer Victor Lewis. At that time, Lewis, a somewhat underappreciated giant of the drumming world who's worked with everybody from saxophone legend Stan Getz to trumpeter Woody Shaw to pianist Kenny Barron, got together with Oliver on a weekly basis, exploring the relationship between saxophone and drums in a duo setting. Those experiences helped to open whole new musical worlds for Oliver, and they planted the seed for this project.

On Strive!, Lewis, Oliver, and two of the saxophonist's hometown collaborators—bassist Alex Coleman and pianist Gary Williamson—take a trip through nine originals. The quartet kicks things off with the title track, an up-tempo swinger that gives Oliver and Lewis a chance to trade. Rubato romancing comes next, as "Thousand Miles" touches on John Coltrane-esque daydreaming, but strict time is back when "Eddie" arrives; that tune, with its funky underpinnings and irresistible groove, must take its name from saxophonist Eddie Harris.

Lewis ushers in "Victory," providing a spark of excitement that lights everybody up, but the next number—"For You"—is all about Oliver. This ballad, capped off with a beautiful cadenza from the saxophonist, is a real treat. A NOLA-infused blues comes next, followed by "Less Travelled," which finds Lewis in Elvin Jones mode at first. The album then comes to its conclusion with the waltzing-and-driving "Taurus" and the subdued-but-grooving "Ready Roll."

Oliver's middleweight tenor sound—not small at all, and not too big and brawny—is forward and direct. He's not an aggressive player per se, but he's an assured and engaging improvisor with plenty to say that's worth hearing. Strive! certainly testifies to that fact.